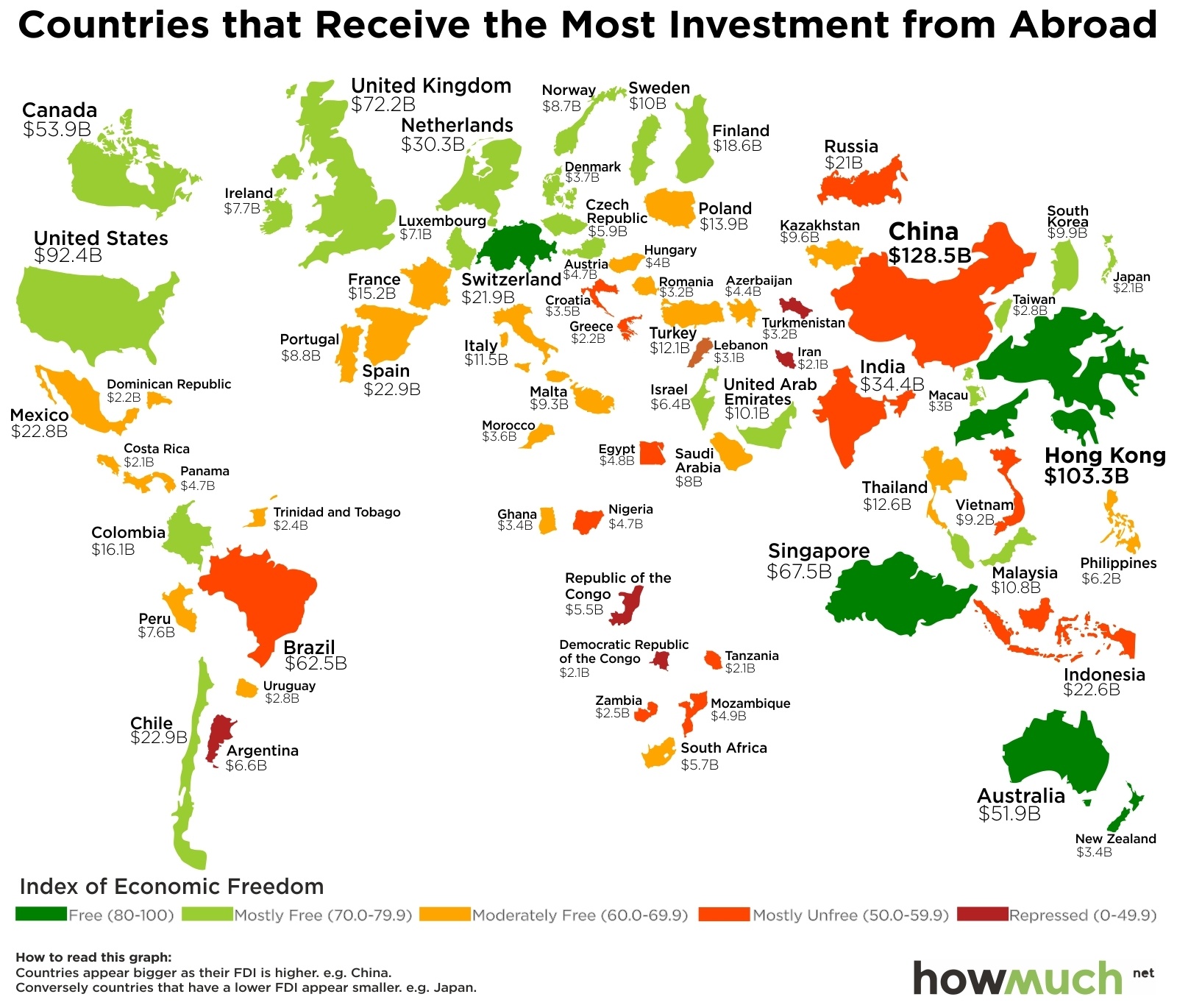 In 2015, China and Hong Kong together attracted 2.5 times more FDI than the United States. That’s why Hong Kong’s unfamiliar shape is about as big as China’s on this map, which morphs countries’ sizes for the amount of FDI they received last year, and why both are larger than the U.S. One thing is different for all three: their color, which indicates where they figure on the Economic Freedom Index, an annually updated ranking compiled by the Heritage Foundation that reflects the ease of doing business all over the world.

Top 5 Countries that Attract the Most Foreign Direct Investment

Top 5 in the Index of Economic Freedom (Free Countries)

Economic freedom and economic opportunity are not synonymous. If they were, China would rank much lower on the FDI list – think India, a country in the same category and with about the same population size, and FDI totalling ‘only’ $34.4 billion in 2015. Foreign investors are willing to work with difficult business circumstances if they see chances of a good return on investment. On the other hand: there is some connection between both categories. Or tiny Hong Kong wouldn’t score so high on the FDI list. In 1997, when the UK handed back its last crown colony to China, it was agreed that Hong Kong would maintain a measure of economic independence – summarized by the slogan “one country, two systems”. As a result, Hong Kong last year was the only other economy in the world attracting FDI in the triple billions ($128.5 billion for China, $103.3 billion for Hong Kong). The U.S. – 324 million inhabitants against Hong Kong’s 7.3 million – attracted just shy of $92.4 billion in FDI.

Bottom 5 in the Index of Economic Freedom (Repressed Countries)

At the much lower end of the scale, the link between economic (un)freedom and foreign direct (non)investment seems much stronger than at the top end. Argentina, which with an economic freedom score of 43.8 points falls within the ‘repressed’ category, attracted just over one-tenth of the FDI of its much bigger, but ‘mostly unfree’ neighbor, Brazil ($6.6 billion vs. $62.5 billion), and also almost three and a half times less than its much smaller, but ‘mostly free’ neighbor, Chile ($22.9 billion).

Mineral-rich but corruption-prone, both Congos (and both in the ‘repressed’ category) together received less FDI than tiny Malta ($9.3 billion). But then, even ‘moderately free’ African nations such as Morocco ($3.6 billion) attracted less FDI last year than other countries elsewhere in the same category, such as Hungary ($4 billion).

Economic freedom is but one factor in determining whether a country will attract FDI; others are the size of its market, that market’s growth prospects, and its proximity to other markets. That being said, free markets (in dark and light green) clearly out-surface the unfree ones (in dark and light red) on this map.