Are you more or less likely to consider voting for

Biden with Kamala Harris as his running mate? 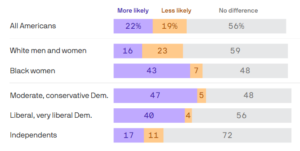 Kamala Harris is accomplishing what Joe Biden’s campaign hoped she would in her first two days as his running mate — doing no harm, while exciting parts of the base with whom Biden needs the most help.

The big picture: Black women especially, but also Black men, Hispanics and Democrats and independents across the board say they are more likely to vote for Biden with Harris on the ticket, according to a new Axios-SurveyMonkey poll.

What they’re saying: “The initial, modestly positive take on Harris is sure to encourage Democrats,” says SurveyMonkey chief research officer Jon Cohen, calling it “a solid start for a party that needs tight unity to win back the White House.”

Between the lines: Liberal respondents have a more intensely favorable reaction to Harris than moderate and conservative Democrats, but the moderates and conservatives are more likely to say that her addition to the ticket increases their chances of voting for Biden.

By the numbers: At least for now, Harris has the highest net favorable rating of the four presidential and vice presidential candidates , at 36% favorable to 34% unfavorable (+2 percentage points).

What’s next: Look for more from our poll tomorrow in AM.

Methodology: This SurveyMonkey online poll was conducted August 11-12, 2020 among a national sample of 2,847 adults in the U.S. Respondents were selected from more than 2 million people who take surveys on the SurveyMonkey platform each day. The modeled error estimate for this survey is +/- 3.0 percentage points. Data have been weighted for age, race, sex, education, and geography using the Census Bureau’s American Community Survey to reflect the demographic composition of the United States age 18 and over