Washington (CNN)For more than three years, federal prosecutors investigated whether money flowing through an Egyptian state-owned bank could have backed millions of dollars Donald Trump donated to his own campaign days before he won the 2016 election, multiple sources familiar with the investigation told CNN.

By summer 2017, Mueller’s office was handling the Egypt investigation gingerly, with the team of prosecutors and FBI personnel often working without sharing full details with the other teams in the office, according to multiple accounts of the office’s dynamics.
CNN sent Mueller detailed questions about the Egypt investigation for this story. He declined to comment.
One official familiar with the work said some investigators believed the Egypt inquiry presented a more direct avenue for Mueller’s team to examine Trump’s finances, in part because it did not have an obvious tie to Russia.
Diving into Trump’s finances, however, was highly sensitive — so much so that Mueller suspected the President would fire him if the White House learned his finances were being probed, crossing a so-called “red line” Trump set early in the Mueller investigation.
Yet understanding Trump’s finances was crucial to the Egypt investigation — especially regarding the $10 million he gave to his campaign.
Needing a final push before Election Day as the polls tightened in 2016, the Trump campaign was running low on cash. Trump’s top campaign officials scrambled to convince Trump to inject money, according to memos of witness interviews from the investigation and contemporaneous news reports.
Trump lagged well behind a pledge he made to spend $100 million of his own money on his campaign. Less than two weeks before Election Day, Trump wrote his campaign a $10 million check, publicly calling it a loan. Campaign finance records showed it as his single largest political contribution, by far, and not one the campaign would reimburse him for.
Federal law enforcement officials suspected, in part because of intelligence information, that there was money moving through the Egyptian bank that could connect to Trump’s campaign donation, according to the sources. Yet untangling the web of Trump’s complex business interests ultimately remained out of reach.
Campaign finance law prohibits foreign political contributions to campaigns for public office. A financial tie between a sitting president and a foreign country could also have explosive national security consequences.
Mueller’s office pressed witnesses to explain how the Trump-Sisi meeting in late 2016 came about. Ahmad, whose aims on the investigation were cloaked in secrecy, was repeatedly present in interviews touching on both Trump’s $10 million contribution to his campaign and the campaign’s ties to Egypt.
For instance, in one witness interview in November 2017, Ahmad and the FBI pressed an unnamed former staffer on the Trump campaign, transition and National Security Council about Trump’s meeting with Sisi and her interactions with Egyptian nationals. Another witness, according to the interview memos, spoke to investigators in August 2018 about the Trump-Sisi meeting and Egypt’s stance on US presidential elections.
Mueller’s team repeatedly asked witnesses questions about Trump foreign policy campaign adviser Walid Phares and his ties to Egypt, after intelligence pointed them toward him. The New York Times first reported in June about the special counsel’s investigation into Phares’ suspected role in an Egyptian influence effort. It led to no charges. The FBI has not made public records that show Mueller’s team interviewing Phares, though the former Trump adviser has said he spoke to investigators. Phares’ assistant declined to comment.
In an initial interview with the special counsel’s office, senior campaign official and White House adviser Stephen Bannon also discussed his role in setting up the meeting between Trump and Sisi.
In a session months later, Bannon was asked about Trump’s $10 million contribution to his campaign, according to another recent release of Mueller’s interview memos.
Bannon explained to Mueller’s investigators how Trump initially resisted cutting his campaign such a large check, and that Trump’s son-in-law Jared Kushner doubted that Trump would do so, saying, “that was not going to happen,” according to Bannon. But Trump was talked into providing the last-minute money by future Treasury Secretary Steven Mnuchin and Kushner, Bannon said. Mnuchin described the money as a “cash advance,” Bannon said, and Trump eventually agreed to wire the money. “Trump was convinced the cash would be there,” Bannon said, according to the interview summary.
A spokesperson for Mnuchin at the Treasury Department confirmed Bannon’s description of convincing Trump to make the loan, and said that Mnuchin had no knowledge of how Trump had $10 million available to him. 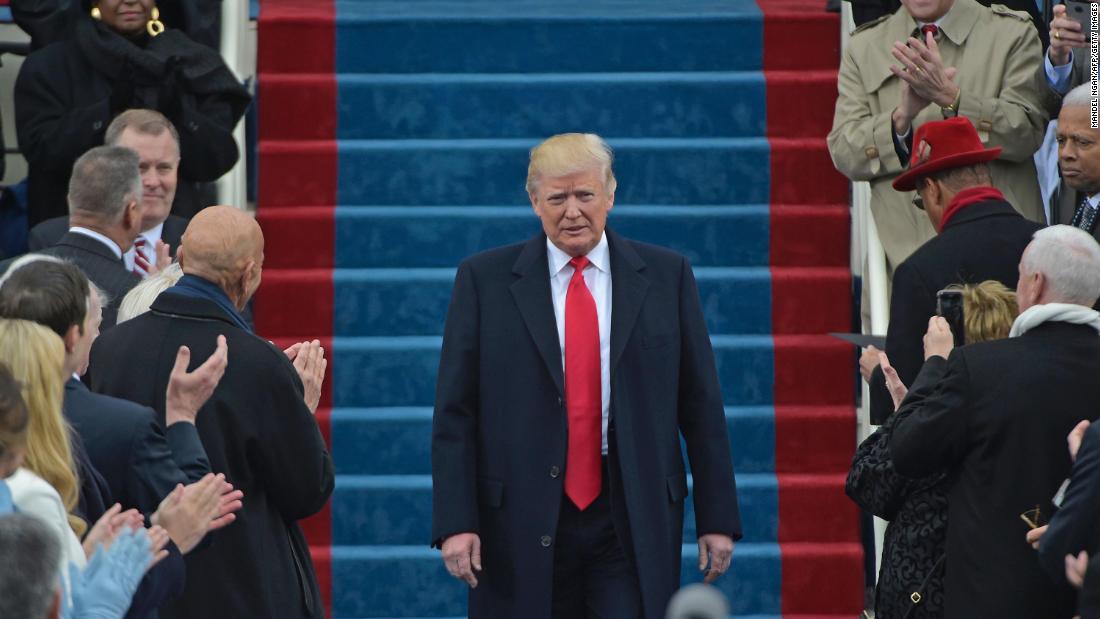 Donald Trump arrives on the platform at the US Capitol for his swearing-in ceremony on January 20, 2017.
Records of the special counsel’s office interviews, which remain heavily redacted, do not make clear whether witnesses were asked directly about money connected to Egypt. At the same time, investigators may have sought not to tip their suspicions to witnesses — especially those like Bannon who were close to the President.
Representatives for Bannon didn’t respond to CNN’s requests for comment.
Trump himself never had to answer questions directly about his $10 million campaign contribution, in part because of the broadness of questions submitted to his lawyers to answer in writing.
Mueller asked the President, “Did any person or entity inform you during the campaign that any foreign government or foreign leader, other than Russia or Vladimir Putin, had provided, wished to provide, or offered to provide tangible support to your campaign?” Trump wrote back in his written answers that he had “no recollection of being told during the campaign” of support from a foreign government.

The Egypt investigation also led to one of the most secretive court proceedings in Washington in years.
Until now, the case was only known to be a fight over a grand jury subpoena between the Mueller team and a foreign government-owned company.
But CNN has learned the case was a fight over records from an Egyptian national bank.
In July 2018, the Mueller team issued a secret grand jury subpoena for records to the Egyptian bank — sparking a months-long court fight that only gradually became public as it progressed through the court system.
Soon enough, the bank was arguing it shouldn’t have to give Mueller records because it was interchangeable with the foreign government that owned it. The US courts disagreed repeatedly, saying the company couldn’t be immune from the Mueller team subpoena.
At the time, the courts and Mueller’s team took extreme caution to keep the matter confidential. One judge, Beryl Howell of the DC District Court, wrote that the case dealt with ”foreign interference in the 2016 presidential election and potential collusion in those efforts by American citizens.”
The fight was so closely guarded that it took months for the names of lawyers involved to emerge, only becoming public first through CNN reporting then confirmed by court records.
Attorneys who represented the bank in the subpoena fight and a representative from their law firm, Alston & Bird, did not respond to CNN’s inquiries for this story.
When the federal appeals court in Washington, DC, heard arguments in the case in December 2018, security cleared journalists from an entire floor of the federal courthouse, allowing attorneys involved in the case to enter and exit the building and the courtroom without being seen.
CNN, however, spotted Mueller team prosecutors, including Ahmad, returning to the special counsel’s office minutes after the hearing ended.
The case even landed before the Supreme Court in early 2019. The high court ultimately declined the company’s bid to block Mueller’s subpoena in March 2019.
Even then, however, the standoff between US prosecutors and the Egyptian bank ended in a stalemate.
The bank had handed over almost 1,000 pages of documents to prosecutors, translated into English, according to redacted court records that were eventually released after the Mueller investigation concluded. But that didn’t satisfy prosecutors, either in the Mueller investigation or the DC US attorney’s office.
The bank’s lawyers  professed it had “gone to great lengths to find and voluntarily produce documents responsive to the subpoena.”
“What more could the Special Counsel want?” they asked, according to court transcripts.
The federal investigators told the court they believed there must be more, and even the judge acknowledged gaps in the bank’s records.
In the end, it was the bank’s word against the investigators. The court proceedings ended with prosecutors getting nothing more than what the bank was willing to turn over, and the bank was excused from hundreds of thousands of dollars in fines that had accrued for defying the subpoena.
It appeared to be a dead end — and not justification enough for Mueller to keep his office open to finish this case alone. 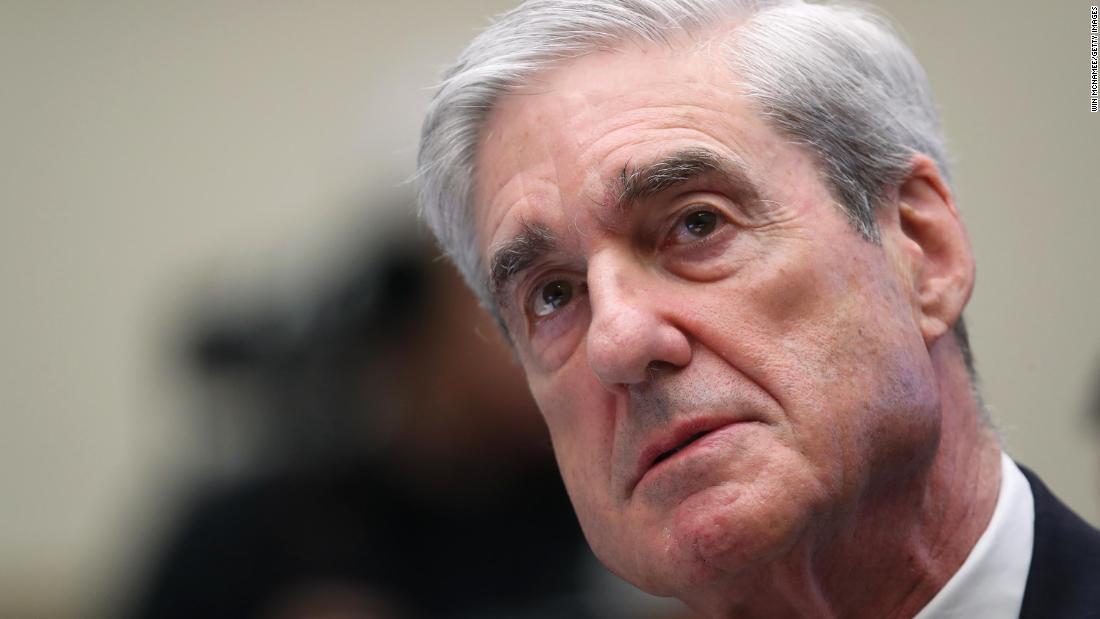 Former Special Counsel Robert Mueller testifies before the House Judiciary Committee about his report on Russian interference in the 2016 presidential election in the Rayburn House Office Building July 24, 2019 in Washington, DC.
Investigators faced a crossroads in early 2019 as Mueller finalized his report. Deputy Attorney General Rod Rosenstein and then-new Attorney General William Barr oversaw the end of Mueller’s probe and were briefed on investigations still ongoing, but they left it up to Mueller’s team and the FBI to determine which unresolved matters should be sent to US attorneys’ offices so Mueller’s office could close, according to sources briefed on the events.
In late March 2019, shortly after Mueller’s investigation concluded, Howell, overseeing final court proceedings in the Egyptian bank’s subpoena case,  asked a prosecutor point-blank if the investigation was over. “No, it’s continuing. I can say it’s continuing robustly,” David Goodhand of the DC US attorney’s office told the court.
Another prosecutor in the office told the judge the investigation, even after Mueller, was “very much a live issue” requiring “a great deal of resources, time and attention by the government,” according to a transcript of a late March 2019 court hearing.
For the past year and a half, the matter was kept even quieter under Barr and three different US attorneys in Washington than it had been under Mueller.
Behind the scenes the investigation hinged on whether prosecutors, having been thwarted by the Egyptian government, had enough evidence to seek more information related to Trump’s finances.
At one point, prosecutors wanted to subpoena Trump’s bank records, according to sources briefed on the investigation. The decision to approve the subpoena fell to US Attorney Jessie Liu in Washington, DC.
Liu spent weeks poring over the investigative records before rejecting the request, according to the sources. Liu told prosecutors she didn’t believe they had met the standard needed to seek the records. The investigation stagnated, but Liu didn’t close the case. She declined to comment for this story.
It’s unclear how much activity occurred after Liu rejected the subpoena request. Prosecutors who disagreed with her decision believed it was now impossible to resolve questions about Trump’s 2016 campaign contribution. Liu told people in her office that if the investigation had produced enough evidence, Mueller would have made the decision to take additional steps, according to sources.
Liu’s tenure as US attorney came to an abrupt end in February, when she was pushed out after Republican lawmakers took aim at her over the handling of other cases. Michael Sherwin, the current acting US attorney in DC, stepped into the job in May and reviewed the Egypt investigation.
Sherwin met with FBI investigators and counterintelligence prosecutors before deciding to close the case this summer, sources briefed on the matter said.

Mueller and the Justice Department have taken pains to keep quiet that the investigation even existed.
The Mueller report does not mention the Egypt investigation. Though some parts of the report are still redacted, the largely public table of contents outlines nothing that closely resembles descriptions of the case.
Mueller dropped only one hint, listing it among 11 cases he investigated then transferred to other offices when his shop closed. For more than a year, the entry was redacted.
Just last month, the Justice Department lifted the redaction on this 11th case and said the case was closed.
On paper, Mueller described the investigation with only three vague words: “Foreign campaign contribution.”