admin
As the latest advance in mobile communications, 5G
promises a new and improved era of network performance to support a broad range of applications for individual consumers and industries.
The roll-out of 5G mobile network services across China, with the world’s biggest internet user population and largest smartphone market, is already forecast to
spur new growth in the country’s information technology industry

That development is expected to rev up digitisation across traditional industries, which is projected to yield more than 10 trillion yuan in growth over the same period.

Initial commercial 5G mobile services were rolled out last year in South Korea, the United States, Australia, Britain, Switzerland, Spain and Monaco. Yet the scale of China’s market is likely to dwarf the combined size of those economies, negating any first-mover advantage.

While most people see 5G as a technical upgrade to 4G, the next-generation wireless system is expected to be a major building block of
the fourth industrial revolution

, also known as Industry 4.0, that would accelerate the automation of traditional industries.

This 5G explainer includes information from previously published articles in the South China Morning Post about the next-generation mobile system, as well as relevant data from the research arm of telecoms trade group the GSM Association (GSMA), standards development body the 3rd Generation Partnership Project (3GPP), the International Telecommunications Union (ITU), and recent reports from AllianceBernstein and other sources.

What is 5G? And why China is racing to become the global leader in this technology

Over the past 40 years, the global telecoms industry has moved to classify various generations of radio network technology in 10-year development increments. 5G represents the fifth generation of this mobile technology development cycle.

Compared with 3G or 4G networks, users on 5G networks will have no difficulty connecting to their mobile provider in crowded places, such as in a packed outdoor concert. The ultra-low latency means that advanced applications, such as autonomous driving, can be supported by 5G networks with precision. Such latency is also expected to help virtual and augmented reality applications take off.

To drive that increased performance, 5G extends into higher mobile frequencies of around 3.5 gigahertz and up to a few tens of GHz. The higher frequencies are new to mobile networks, but are commonly used in other applications, such as point-to-point radio links and body scanners for security checks.

Some of the frequencies for 5G will also be in low- and mid-frequency spectrum that is currently used by 2G, 3G and 4G systems. In telecoms, spectrum refers to the radio frequency bands used by network operators to send voice and data.

What is the difference between 5G and other generations of mobile technology?

Each new generation of mobile technology seeks to build on the previous one.

That was followed by 2G, which introduced digitisation, mobile roaming and short text messaging. Equally important, according to Bernstein’s latest 5G Blackbook, the standardisation of equipment during that era led to lower costs of both network gear and handsets, helping broaden the uptake of services.

3G enabled data and connection to the internet, which ushered in the smartphone age.

When 4G technology was introduced, users saw a significant improvement in internet connection that allowed for the upload of larger data files. Peak network data rates, from 42 megabits per second to 1 gigabit per second, enabled the widespread consumption of high-definition streaming video on demand.

5G builds upon 4G by providing a peak data rate of up to 20Gbps and an average user experience of 100Mbps, compared with about 10Mbps in the previous generation.

It also comes with an ultra-low latency rate of less than 1 millisecond. Existing 4G networks have a latency of 10 milliseconds. Latency is defined as the amount of time it takes for a packet of data to get from one point to another.

The ITU, which helped set the performance targets for 5G networks in 2015, said the new technology would support 1 million connected devices per square kilometre as well as have greater efficiency in terms of power and use of spectrum.

What are the advantages of 5G?

It represents the first wireless technology designed primarily to support mobility services for machines. For telecoms network operators, 5G would extend the potential number of connected devices to many times the number of their subscribers.

3) Massive Machine Type Control, which ensures 5G mobile networks are able to connect millions of devices per square kilometre – essential for the development of connected smart cities of the future.

Which country was the first to launch commercial 5G mobile services?

the first country in the world to bring 5G into reality 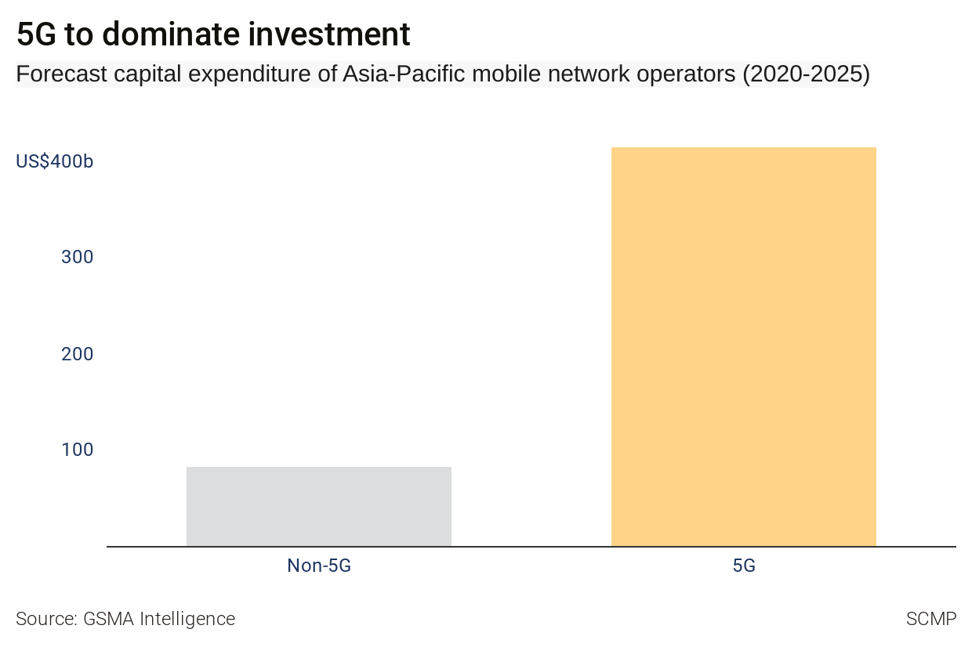 Between 2020 and 2025, mobile network operators in the Asia-Pacific region will invest more than US$400 billion on infrastructure development, 80 per cent of which will be on 5G, according to GSMA Intelligence.

How many commercial 5G mobile networks are now in operation?

Commercial 5G services were available from 87 mobile network operators in 39 markets around the world as of June 30, according to the latest data from GSMA Intelligence.

It found 30 of those operators also offered FWA services, which support home broadband over 5G networks.

5G was launched earlier than planned in Sweden and South Africa in the second quarter, while the Covid-19 pandemic caused roll-outs to be delayed in India, Greece and Portugal, according to GSMA Intelligence. It said the first 5G networks in Sub-Saharan Africa were also launched in the second quarter.

Another 84 mobile network operators have announced plans to launch their 5G networks, with 13 of these set to introduce 5G-based FWA services.

Who is the world’s biggest 5G network operator?

China Mobile, which already runs the world’s largest 4G network, has the industry’s biggest 5G operation by number of subscribers.

The company reported 113.6 million so-called 5G package customers at the end of September, when its total subscriber base reached 946.2 million.

The battle over 5G

Who sets the standards for 5G?

The ITU, a specialised agency under the United Nations, is responsible for the standardisation process for IMT-2020, the name it uses for the 5G mobile system.

Major industry bodies, led by the 3GPP and members of the GSMA, work with the ITU in setting standards for 5G.

The 3GPP is a collaboration between groups of telecommunications associations in Asia, Europe and North America. It produces reports, studies and specifications around three areas: radio access networks, services and systems aspects, and core networks and terminals.

The GSMA represents the interests of more than 750 mobile network operator and almost 400 companies in the broader mobile ecosystem, including smartphone makers, software companies, telecoms equipment suppliers and internet companies. There are two sets of specifications, called Release 15 and Release 16, completed under the 3GPP that are helping shape the 5G infrastructure plans of mobile network operators around the world.

Release 15, which commenced development in June 2016 and was completed in June 2019, forms the basis of all existing 5G mobile networks as of June 30, according to Bernstein. It was divided into two sub-releases: one is called “5G stand-alone” and the other, “5G non-stand-alone”.

The non-stand-alone variant provides a faster and less costly upgrade path for mobile network operators, enabling them to protect their legacy infrastructure because this sub-release is “backward compatible” with 4G. Operators are able to hook up new 5G base stations – known as the radio access network (RAN) – with their existing 4G “core” infrastructure to provide higher data speeds and greater capacity for consumer services, without making any substantial changes.

In mobile networks, the core network serves as the centralised brain, while the RAN provides the geographic coverage.

Under the stand-alone variant, which is what China’s three network operators have been pushing, an independent 5G core and RAN are deployed.

Release 16, which was originally expected to be completed in December last year, is expected to be the basis of upgrades to existing 5G networks from the third quarter of this year. Release 16 was further delayed because of the Covid-19 pandemic and the inability of working groups to meet. Still, the 3GPP pushed forward with virtual meetings and locked down the final specification in June.

The innovations brought by Release 16 include:

1) Enabling 5G broadcast so millions of connections can share a single stream, or multiple streams, for live coverage of major sporting events, among many use cases;

such as vehicle-to-vehicle and vehicle-to-pedestrian connections, which will help make autonomous driving safer; and

Once a specification is completed, according to Bernstein, it typically takes three to six months for that to become available in commercial software used on telecoms equipment and other devices.

The 3GPP expects Release 17, which is still in the planning stage, to be finalised by December 2021. This is expected to focus on unmanned aerial vehicles, remote medical applications such as robotic surgery, support for cloud gaming and improved positional accuracy to tens of centimetres. 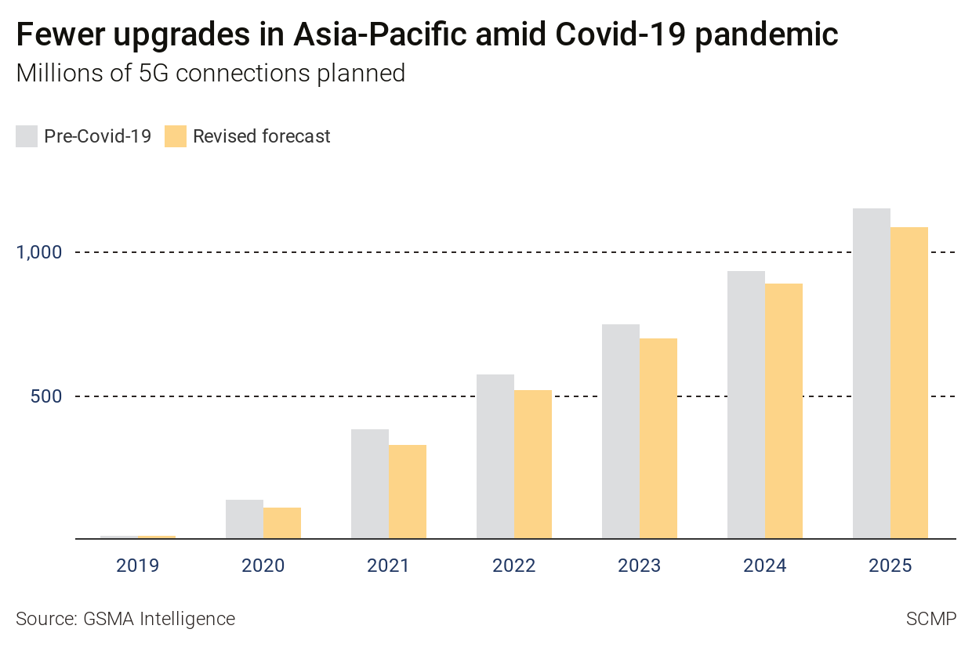 The Covid-19 pandemic has caused a slowdown in the build-out of 5G networks across the Asia-Pacific region, which has led GSMA Intelligence to revise its forecast. It said the total number of 5G connections in the region will be almost 20 per cent lower in 2020 than previously expected.

Which mobile spectrum is used for 5G?

Many of the commercial 5G network deployments around the world use spectrum in the 3.3GHz-3.6GHz band, considered the most popular range for global roaming. Mobile network operators in the Asia-Pacific region, Europe and the Middle East mostly use the 3.5GHz band.

, which covers higher frequencies than the radio waves that have long been used on mobile network services, for its commercial 5G infrastructure. Some operators in Italy, South Korea and Uruguay have also deployed their 5G networks on mmWave frequencies.

Network operators on mmWave use the frequencies between 30GHz and 300GHz, compared to the bands below 6GHz used by most mobile services providers, according to a report by professional association The Institute of Electrical and Electronics Engineers. The name mmWave comes from how these waves vary in length from 1 to 10mm, compared to the radio waves that serve most mobile networks, which measure tens of centimetres in length.

The ITU has earmarked 17.25GHz of new mmWave spectrum for mobile services during the World Radiocommunication Conference held in Budapest, Hungary, in December last year. This resolution is expected to get more markets worldwide to consider the US mmWave 5G model alongside the more popular mid-frequency 5G model.