Integrating back to one’s home country is not always easy after two decades away.

Happily, Australians Paul Calder and Graeme Fowler had a major project to throw themselves into when they called time on the expat life after 11 years in Singapore and 13 in Hong Kong.

Having made the decision in June 2019, Calder, a public relations and communications director, and Fowler, a retail designer, turned their attention to the renovation of their 19th century terrace house in Melbourne’s St Kilda, purchased 10 years earlier.

Fowler had first seen, and fallen in love with, the middle of three conjoined terrace houses in an online advertisement. A few months later, when they went home for Christmas and discovered the property was still available, they knew they had to act.

This distinctly Australian style of architecture first appeared in the 1850s as developers, seeking to optimise prime inner urban sites, stacked homes together in rows, trimming each with an ornate veranda.

Although many of Melbourne’s “terraces” have been stripped of their Victorian adornments over time, this one remained largely intact. As a trio of “gentlemen’s residences” built by a wealthy tobacco trader in 1886, it had the luxury of a large front garden, a sunny rear courtyard, and even a double garage accessible from a shared laneway.

As was the norm for the era, the “grand” rooms reserved for the family are front of house, with their high ceilings, decorative cornices and lavish woodwork, while the more austere servants’ quarters occupy the back section – in all measuring around 3,000 square feet over two levels, with four bedrooms and two bathrooms plus powder room.

Delightfully quaint though they may be, these terraces are often flanked by other houses with which they share common walls. Typically, the properties feature long corridors devoid of windows, with rooms branching off to one side, making them dark inside and, because of the high ceilings, hard to heat. Neither of these issues proved to be insurmountable for Calder, Fowler, their architect Sam Bell (of Bellhaus Architectural Drafting) or builder Red Door Project.

“To introduce more light, we designed three custom-built steel windows that run the length of the kitchen and extend all the way to the floor,” Calder explains. Two sash windows in the kitchen/lounge area were similarly enlarged, a third added, and the French door to the courtyard replaced with a custom-made larger steel-framed door.

“Upstairs, we removed a wall to open up the landing and allow the natural light from the full-length front window to come through the space,” Calder says.

While still in Hong Kong, Calder and Fowler had planned their renovation to a tee. They had intended to begin right away, but took a friend’s advice to live in the house for six months to develop a feel for the space.

“We’re glad we did,” says Fowler. “We got to appreciate the play of light at different times of the day, and where the breezes come from.” If not, they may never have redesigned the kitchen, so that, at certain times, a rainbow of colour beams down from a stained-glass window in the servants’ staircase above. Replacing fixed glass panels with windows that open also allows in fresh air and nature’s scents from the foliage outside.

While the formal rooms retain their original purpose – an elegant sitting room and dining room connected by bi-fold doors, each with a marble fireplace (now gas fired) and the original hardwood floors – the kitchen was completely repurposed to cater to modern lifestyles. A showplace in matt-black laminate and marble, the kitchen’s appliances are integrated into cabinetry for a sleek, streamlined look. Guests sit around the outsized benchtop chatting while the couple cook (a joy rediscovered after decades of domestic help), and look out, beyond the lounge, to views of the courtyard, where sunshine filters through tree canopies.

From Australia to Asia: a Hong Kong home tells a couple’s story

The upstairs front of house has been masterfully redesigned to provide the owners with a private retreat, comprising a library, sumptuous bedroom, dressing room and marble bathroom, its glamour announced by a magnificent Italian waterfall chandelier hanging above the landing.

A separate half staircase leads to a corridor transformed into a gallery displaying framed black-and-white photos of the couple’s global travels. Branching off it are two guest bedrooms, a guest bathroom, a study and the rear staircase servants once used leading down to the kitchen.

Having come from a large house on The Peak, the couple brought most of their furnishings with them from Hong Kong, giving a much-loved feeling to their new “forever home”.

Conceding that their initial budget estimations were “wildly naive”, the couple’s inspired design ideas and commitment to follow through have clearly paid off. Living five minutes from the beach on Melbourne’s CBD fringe, in a vibrant multicultural community yet with so much private space, it’s evident that Calder and Fowler have well and truly landed on their feet. 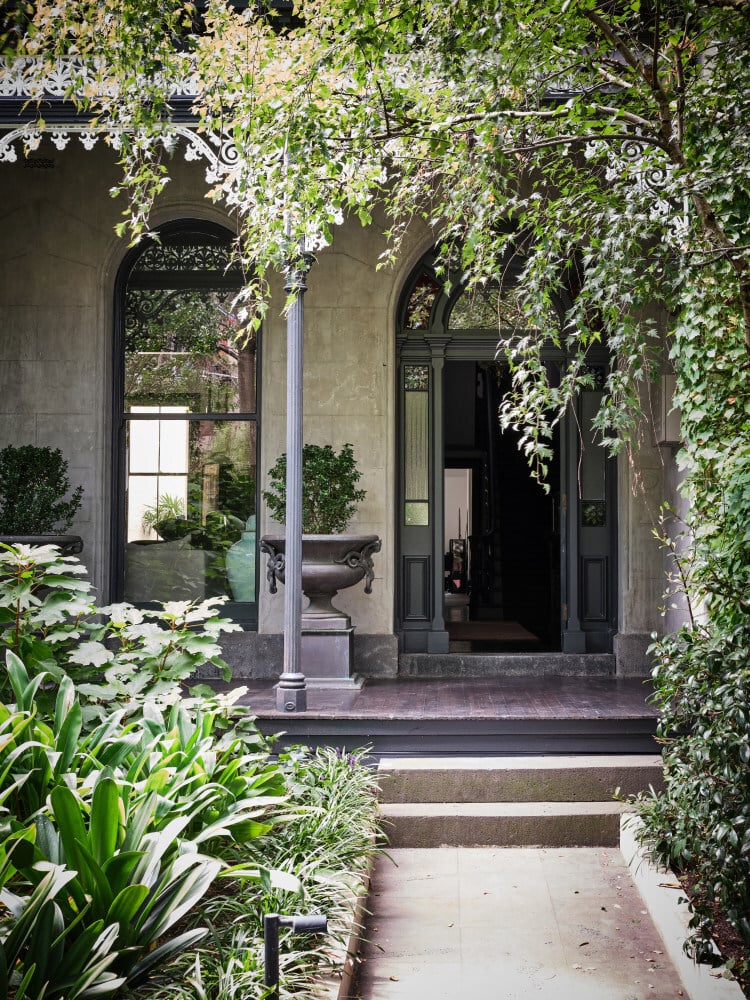 Front garden The colour of the render on the solid brick facade was changed from cream to white and grey to tie in with the monochrome palette used throughout the interior. The front garden, landscaped by the couple, provides privacy from the street and a pleasant outlook from the front sitting room. 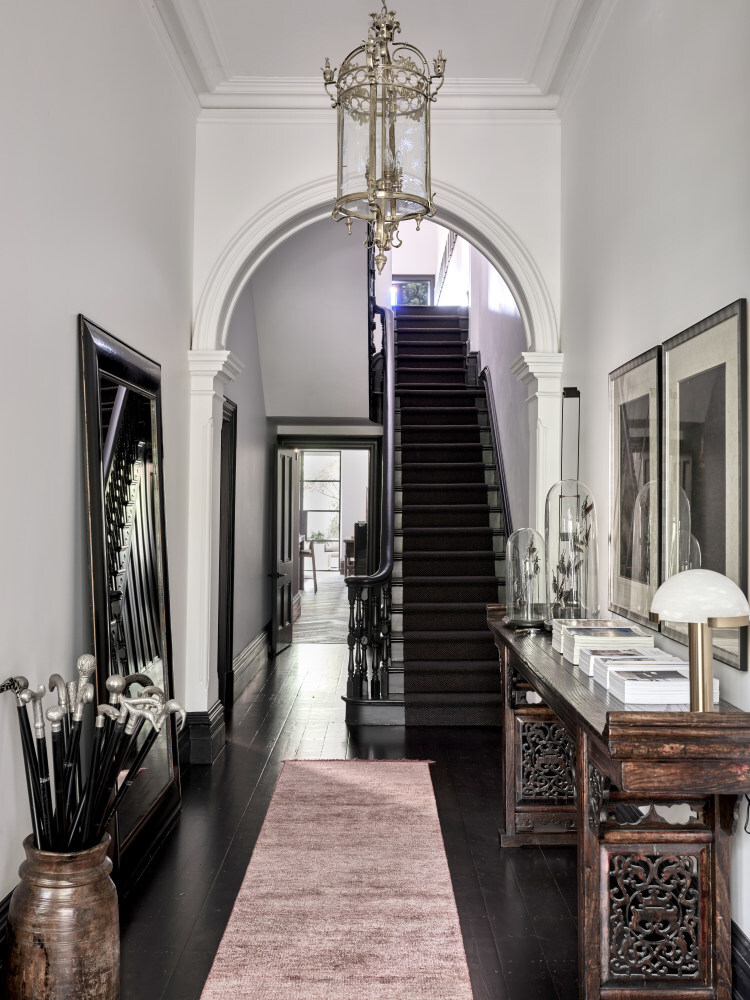 Entry hallway Chinoiserie and other objets in the entrance – the walking sticks, console table, mirror and Tibetan artworks – are mementos collected during the couple’s two decades in Asia. The antique pendant light, which matches the two in the formal living and dining rooms, was a serendipitous find at Christopher & Alexander’s Lighting. The floor runner, hand knotted in India, was bought from Hali Rugs. The Baltic pine staircase and decorative archway are original. The antique coffee table, bought 25 years ago in Singapore, also moved to Melbourne with the couple. 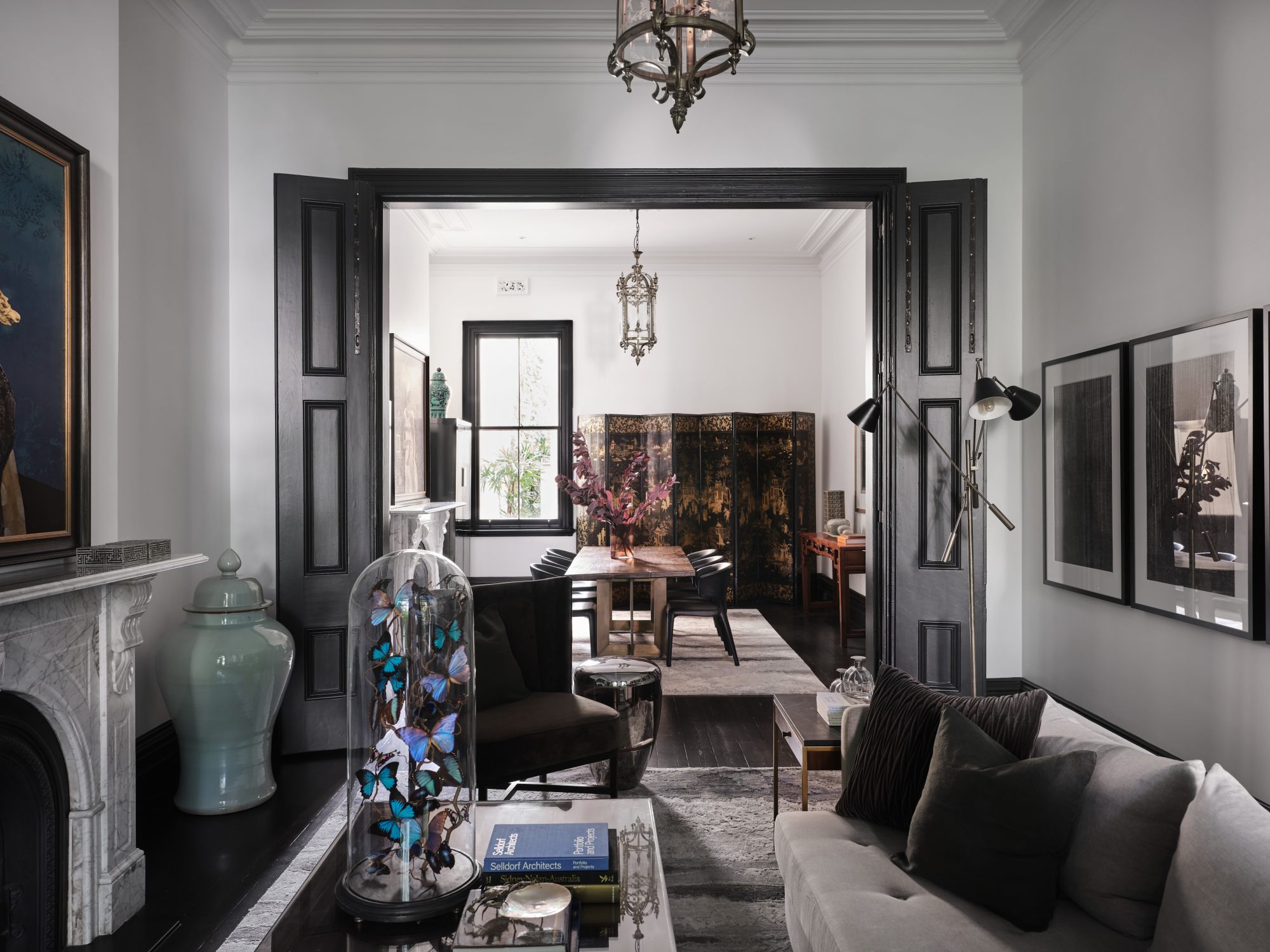 Sitting room and dining area The artworks, from Ovo, and mid-century floor lamp (from the Mercanteinfiera antiques fair in Parma, Italy) came from the couple’s Hong Kong home. The lounge chair was bought from Zuster. Next to it is a silver lamp, which was from a shop in Shenzhen since closed. Bi-fold doors in Victorian Baltic pine, original right down to their hinges, lead into the dining room, which is furnished with a 17th century, eight-fold Chinese lacquer screen (bought at the Mercanteinfiera antiques fair), a dining table upcycled from an Indonesian timber door, and dining chairs from Zuster.

The altar table was bought 25 years ago in Singapore. The hand-knotted silk rugs in each room were designed by the couple, and made in an Indian village outside Varanasi. Overhead pendant lamps, in French Rococo style with hand-cut, curved and bevelled crystal panels, circa 1940, came from Christopher & Alexander’s Lighting. Library The mid-century Murano glass Venini Tronchi Waterfall Chandelier, sourced from Peninsula Antiques e Moderno, was so heavy its installation required a huge supporting beam (concealed within the ceiling). The library shelves were custom made to the couple’s design by their builder, Red Door Project. 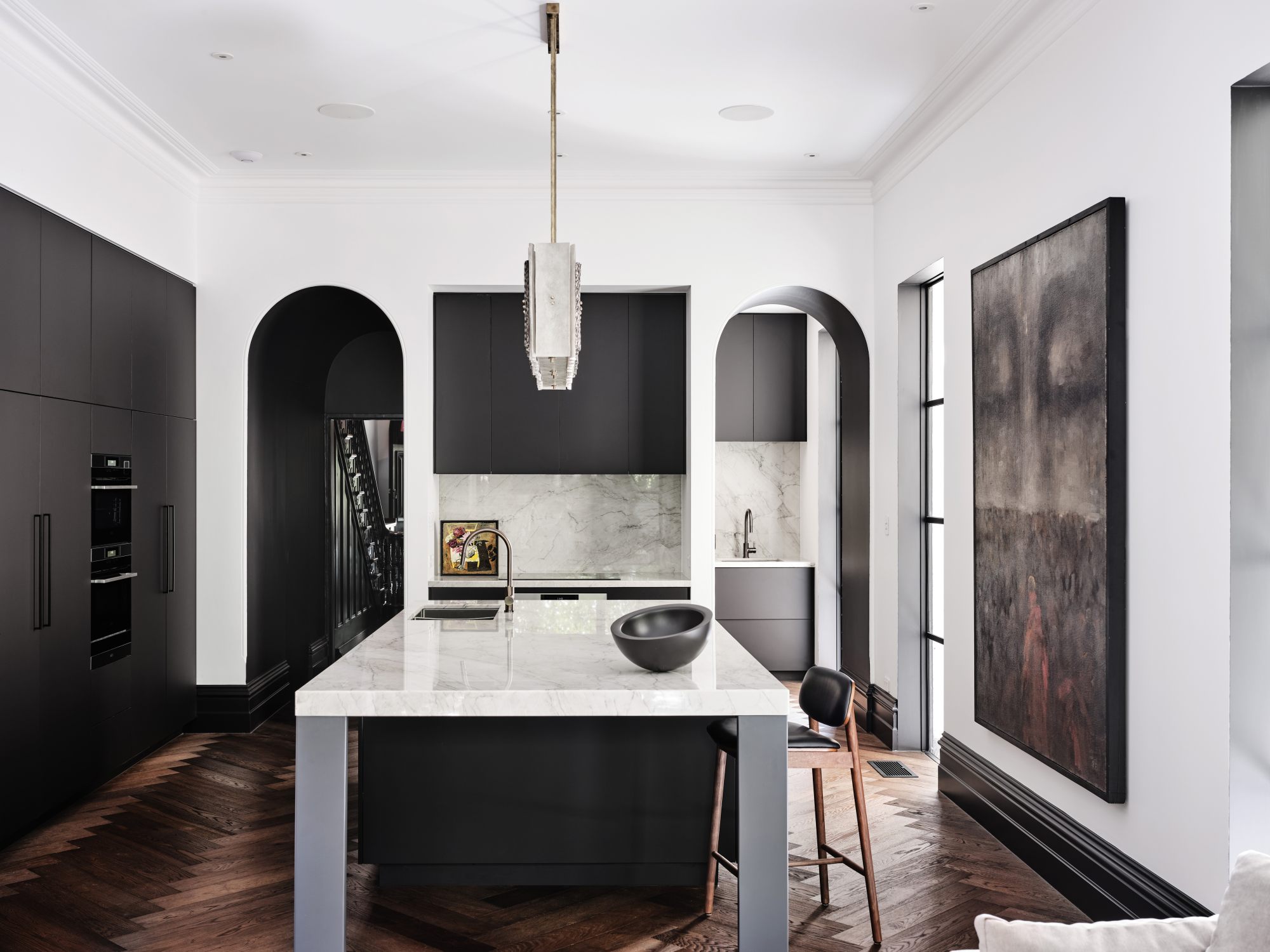 Kitchen Kitchen appliances and work areas are integrated into a wall of cabinetry crafted in black Arborite Supermatt soft laminate by Melbourne cabinetmakers COS Interiors. The large painting, Enlightenment by Zhang Jingxin, came from a Shenzhen gallery since closed. The Mirage Quartzite benchtop from CDK Stone Australia makes a convivial, informal eating area.

Above the bench is a Murano glass pendant from Peninsula Antiques e Moderno. The two archways, leading into the hallway and laundry room, respectively, are new additions, designed to add symmetry and extend the arched theme from the front facade windows further into the house. The bar chair was from Life Interiors. 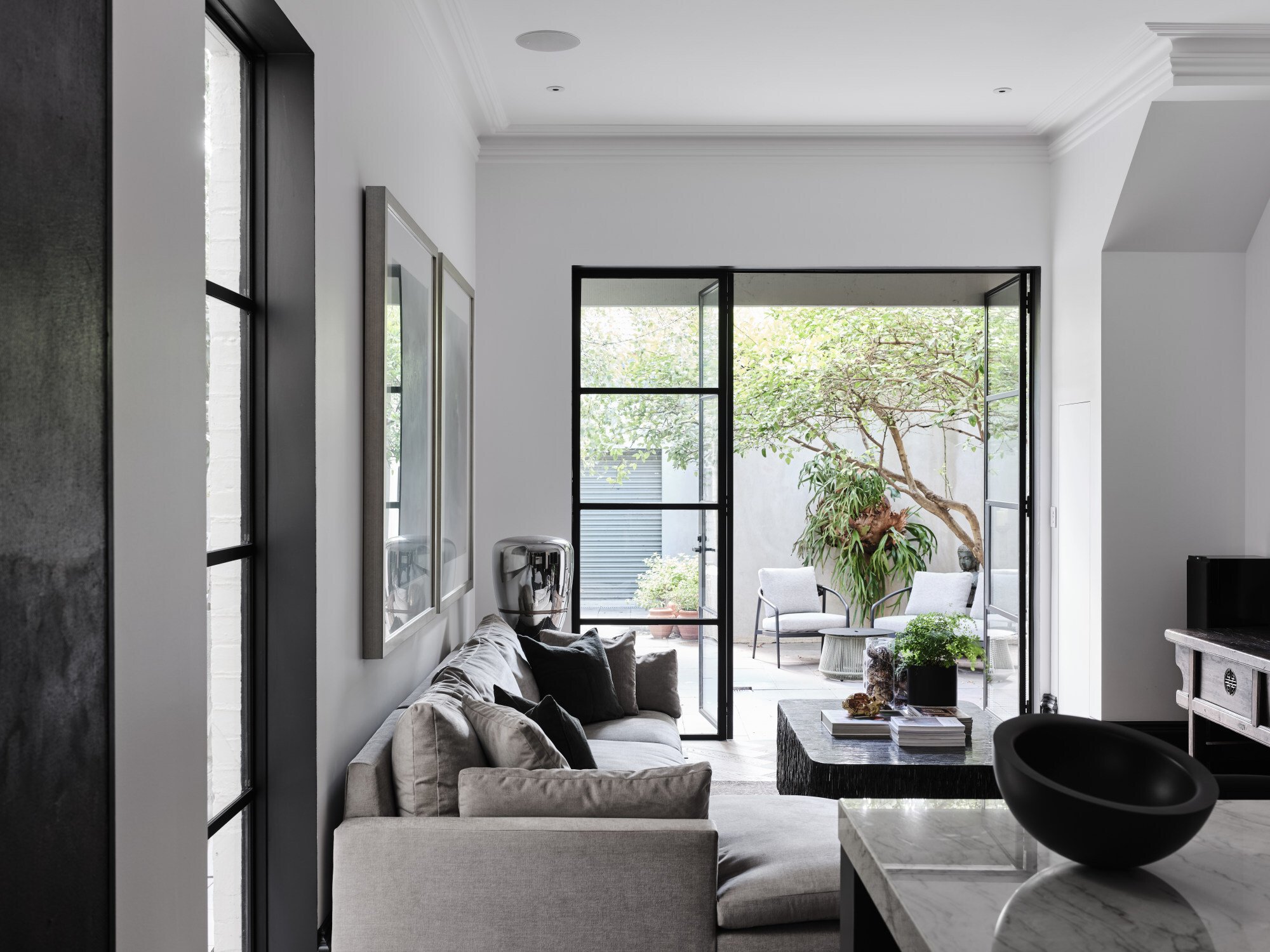 Lounge Adjoining the kitchen, the lounge features artwork by Chinese contemporary artist Sanzi, from a gallery in Shenzhen since closed. Below it is a sofa from Melbourne’s West Elm Furniture. The ornamental bowl on the kitchen bench, by designer John Pawson, came from When Objects Work.

The coffee table, which the couple designed and had made in India, displays the couple’s favourite design books and glass vases of tiger cowrie seashells. The reflective lamp, bought in Shenzhen, used to illuminate their living room in Hong Kong. 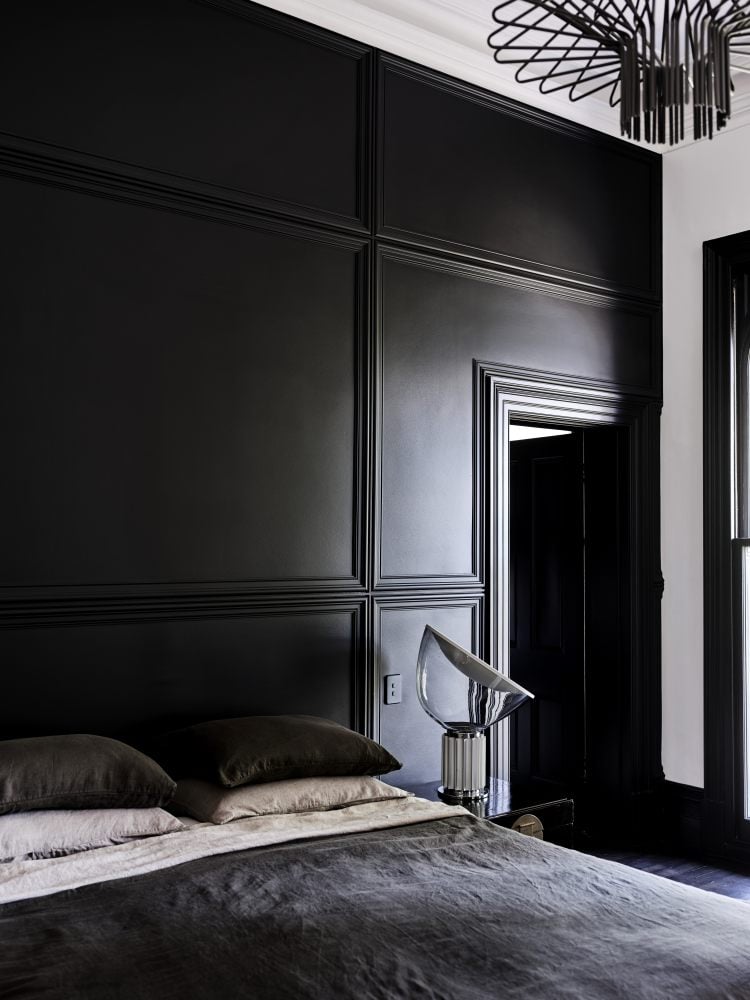 Main bedroom The rich timber panelling was designed by the couple, inspired by French wall mouldings. The Taccia bedside lamp, designed by the Castiglioni brothers in 1962, is available at Hong Kong’s Colourliving. The pendant lamp, bought in Shenzhen, used to hang in the couple’s house on The Peak.

Main en suite In the lavish Italian marble en suite, complete with fireplace by the tub, the vanity and top of the bath were honed from a 200mm slab of Lorde White marble (from CDK Stone Australia), also cut into tiles for the flooring. The skirting is a combination of new and existing hardwood, painted in Dulux Black Caviar while the walls are Dulux Vivid White. The wall light came from Beacon Lighting. It’s a jungle in there What to do with the landing on the former servants’ staircase, now leading into the study? To lend a wow factor to an otherwise nondescript back-of-house space, the walls were papered in an abstract botanical print wallpaper, Botanica Forest, from Melbourne’s Gaudion Furniture. Before choosing, Graeme Fowler Photoshopped many wallpaper swatches over the stained glass of the landing window (not visible in this shot) so that the blue and green hues were just right