The Shanghai Cooperation Organisation (SCO), or Shanghai Pact,[1] is a Eurasian political, economic, and security alliance, the creation of which was announced on 15 June 2001 in Shanghai, China by the leaders of China, Kazakhstan, Kyrgyzstan, Russia, Tajikistan, and Uzbekistan; the Shanghai Cooperation Organisation Charter, formally establishing the organisation, was signed in June 2002 and entered into force on 19 September 2003. The original five members, with the exclusion of Uzbekistan, were previously members of the Shanghai Five group, founded on 26 April 1996. Since then, the organisation has expanded its membership to eight states when India and Pakistan joined SCO as full members on 9 June 2017 at a summit in Astana, Kazakhstan.

The Heads of State Council (HSC) is the supreme decision-making body in the SCO, it meets once a year and adopts decisions and guidelines on all important matters of the organisation. Military exercises are also regularly conducted among members to promote cooperation and coordination against terrorism and other external threats, and to maintain regional peace and stability. The SCO is the largest regional organisation in the world in terms of geographical coverage and population, covering three-fifths of the Eurasian continent and nearly half of the human population.

The Shanghai Five grouping was created 26 April 1996 with the signing of the Treaty on Deepening Military Trust in Border Regions in Shanghai, China by the heads of states of China, Kazakhstan, Kyrgyzstan, Russia and Tajikistan.[3]

On 24 April 1997, the same countries signed the Treaty on Reduction of Military Forces in Border Regions in a meeting in Moscow, Russia.[4] On 20 May 1997, Russian President Boris Yeltsin and Chinese leader Jiang Zemin signed a declaration on a “multipolar world”.[5]

Subsequent annual summits of the Shanghai Five group occurred in Almaty, Kazakhstan in 1998, in Bishkek, Kyrgyzstan in 1999, and in Dushanbe, Tajikistan in 2000. At the Dushanbe summit, members agreed to “oppose intervention in other countries’ internal affairs on the pretexts of ‘humanitarianism’ and ‘protecting human rights;’ and support the efforts of one another in safeguarding the five countries’ national independence, sovereignty, territorial integrity, and social stability.”[6]

By 2007 the SCO had initiated over twenty large-scale projects related to transportation, energy and telecommunications and held regular meetings of security, military, defence, foreign affairs, economic, cultural, banking and other officials from its member states.[citation needed]

The SCO is widely regarded as the “alliance of the East”, due to its growing centrality in Asia-Pacific, and has been the primary security pillar of the region.[11] In 2017, SCO’s eight full members account for approximately half of the world’s population, a quarter of the world’s GDP, and about 80% of Eurasia’s landmass.[citation needed] 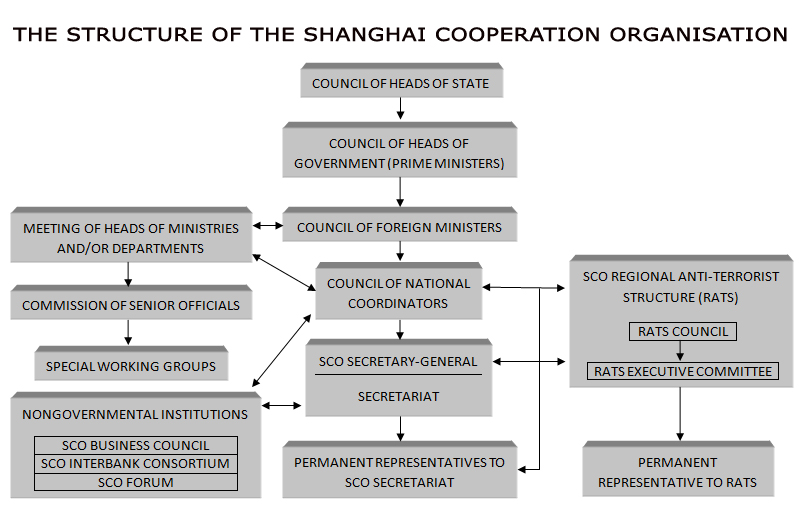 In 2008, Belarus applied for partner status in the organisation and was promised Kazakhstan’s support towards that goal.[citation needed] However, Russian Defence Minister Sergei Ivanov voiced doubt on the probability of Belarus’ membership, saying that Belarus was a purely European country.[18] Despite this, Belarus was accepted as a Dialogue Partner at the 2009 SCO Summit in Yekaterinburg, and after applying in 2012, was granted observer status in 2015.[17]

Iran has observer status in the organisation, and applied for full membership on 24 March 2008.[citation needed] However, because it was under sanctions levied by the United Nations at the time, it was blocked from admission as a new member. The SCO stated that any country under UN sanctions could not be admitted.[19] After the UN sanctions were lifted, Chinese leader Xi Jinping announced its support for Iran’s full membership in SCO during a state visit to Iran in January 2016.[20]

The position of Dialogue Partner was created in 2008.[21]

Nepal was granted dialogue partner status at the group’s 2015 summit in Ufa, Russia.[22]

Sri Lanka was granted dialogue partner status at the group’s 2009 summit in Yekaterinburg.[23][24]

Turkey, a member of the NATO alliance, was granted dialogue partner status in the Shanghai Cooperation Organisation (SCO) at the group’s 2012 summit in Beijing.[16] Turkish Prime Minister Recep Tayyip Erdoğan has stated that he has discussed the possibility of abandoning Turkey’s candidacy of accession to the European Union in return for full membership in the Shanghai Cooperation Organisation.[25] This was reinforced again on 21 November 2016, after the European Parliament voted unanimously to suspend accession negotiations with Turkey.[26] Two days later, on 23 November 2016, Turkey was granted the chairmanship of the energy club of SCO for the 2017 period. That made Turkey the first country to chair a club in the organisation without full membership status. As of 2021, the Turkish government has not applied for SCO membership.

Multiple international organisations and one country are guest attendances to SCO summits.

Relations with the West[]

The United States applied for observer status in the SCO, but was rejected in 2005.[81]

The SCO has made no direct comments against the U.S. or its military presence in the region; however, some indirect statements at the past summits have been viewed by Western media outlets as “thinly veiled swipes at Washington”.[83]

A European Parliament researcher expressed her view that “institutional weaknesses, a lack of common financial funds for the implementation of joint projects and conflicting national interests have prevented the SCO from achieving a higher level of regional cooperation”.[84]

There have been many discussions and commentaries about the geopolitical nature of the Shanghai Cooperation Organisation.

Matthew Brummer, in the Journal of International Affairs, tracks the implications of SCO expansion into the Persian Gulf.[85]

Also, according to political scientist Thomas Ambrosio, one aim of SCO was to ensure that liberal democracy could not gain ground in these countries.[86]

Iranian writer Hamid Golpira had this to say on the topic: “According to Zbigniew Brzezinski’s theory,

control of the Eurasian landmass is the key to global domination and control of Central Asia is the key to control of the Eurasian landmass….Russia and China have been paying attention to Brzezinski’s theory, since they formed the Shanghai Cooperation Organisation in 2001, ostensibly to curb extremism in the region and enhance border security, but most probably with the real objective of counterbalancing the activities of the United States and the rest of the NATO alliance in Central Asia”.[87]

At a 2005 summit in Kazakhstan the SCO issued a Declaration of Heads of Member States of the Shanghai Cooperation Organisation which addressed their “concerns” and contained an elaboration of the organisation’s principles. It included:

“The heads of the member states point out that, against the backdrop of a contradictory process of globalization, multilateral cooperation, which is based on the principles of equal right and mutual respect, non-intervention in internal affairs of sovereign states, non-confrontational way of thinking and consecutive movement towards democratization of international relations, contributes to overall peace and security, and call upon the international community, irrespective of its differences in ideology and social structure, to form a new concept of security based on mutual trust, mutual benefit, equality and interaction.”[88]

The People’s Daily expressed the matter in these terms:

“The Declaration points out that the SCO member countries have the ability and responsibility to safeguard the security of the Central Asian region, and calls on Western countries to leave Central Asia.

That is the most noticeable signal given by the Summit to the world”.[90]

A 2010 analysis in American Legion Magazine said that “Chinese Premier Wen Jiabao… has concluded that the United States is manoeuvring ‘to preserve its status as the world’s sole superpower and will not allow any country the chance to pose a challenge to it.'”[91]

decisions of  all summits for review and development

I will continue working on this topic