SEATTLE — Seattle Police Chief Carmen Best will retire in September after 28 years with the department.

The news of her departure came just hours after the Seattle City Council voted to cut spending for the Seattle Police Department (SPD).

Budget cuts could result in the loss of up to 100 officers and Best said she was not willing to lose members of her force.

“This is not about money. And it certainly isn’t about the demonstrators. Believe me, I have a lot thicker skin than that,” Best said Tuesday. “It really is about the overarching lack of respect for the officers.”

Best has also been dealing with issues regarding police use of force during Seattle protests, and navigating the federal consent decree.

Best said she was not included in any city council discussions regarding budget cuts and program changes within SPD. She plans to resign Sept. 2.

Best has been with SPD for 28 years. She was the first Black police chief in Seattle’s history. She took on the role of chief of police on Aug. 13, 2018.

Deputy Chief Adrian Diaz will be appointed as the interim chief of police effective Sept. 3. The interim position does not require council confirmation.

While Durkan thanked and praised Best for her longtime commitment to Seattle, she said it was “mystifying” the city council would act without consulting Best.

KING 5 Chief Political Reporter Chris Daniels said the outgoing press conference was extraordinary in that is was also an attempt to villainize the actions of the council at the same time.

While Best deflected questions that the original proposed pay cut was the source of her frustration, she also admitted that she couldn’t help but take it personally.

In separate interviews, a pair of council members struck a conciliatory tone and acknowledged the hard line approach was an error in judgement.

Councilmember Lisa Herbold, also the Council’s Public Safety chair, said she regretted her initial vote. “I felt it was a mistake. As soon as I requested from Central staff, the list of department heads for all the city departments and saw that with our action, it would result in her being the second lowest-paid department director, while also having the largest staff to manage.”

The council approved a package Monday with a less significant salary cut for Best. But it appeared, as far as Best was concerned, the damage was already done and the gap of distrust too wide.

A press release on behalf of Council President Lorena Gonzalez, Budget Chair Teresa Mosqueda, and Councilmember Tammy Morales struck a different tone, and touched on race as it pertained to the decision making.

Their statement read, in part:

“This isn’t personal, the Council is addressing accountability and systemic racism in Seattle’s Police Department. This isn’t retaliatory — it’s the beginning of really important work. And this is about addressing the systemic racism, repairing the harm done by this City to Black and Brown communities.

This Council’s recent budget actions and our efforts going forward will remain squarely focused on the need to rebalance the budget and begin the process of transforming community safety in our City.

Yet, we still have work to do in Seattle. This Council is focused on the work ahead of us: addressing the structural racism baked into police department contracts, a call for demilitarizing the police department, and the need to shift how we invest resources in Black and brown neighborhoods to support thriving communities.

We had expected that Chief Best would walk alongside us to reimagine what community safety could look like. As a Black woman who has been in the department for decades, she’s uniquely qualified to bring her lived experience to this conversation and that door remains open should she wish to share her expertise and lived experiences with Council.”

However, a second email on behalf of the three councilmembers retracted that part of the statement, thanked Best for her service, saying “we are saddened to hear of her sudden departure from the SPD.  We understand and respect Chief Best’s decision to step down from her position”.

Herbold says she believes there are ethics protocols in place for negotiating directly with department heads, and that was the case here. She also says, as Public Safety Chair, she told both Best and Durkan about plans to roll back the original salary cut amendment for a smaller, incremental adjustment.

Herbold and Lewis also acknowledged in interviews the criticism they’ve received for running for office on a platform of adding police officers, just a year ago.

“I recognize that I’ve changed my position and it’s come from reflection,” said West Seattle’s Herbold, continuing, “I just started to do a lot of reading and a lot of soul searching about whether or not I was only listening to one set of voices about what makes safe communities. And I, you know, it’s true. I mean, the addition and the growth of police department budgets has long been a third rail of politics. And I had accepted it unquestionably.”

“I certainly did, last year, campaign on expanding the police force. But we were presented with new information,” added Lewis. “56% of the calls to the police are responding to are non-criminal. What that suggests to me is not that we need more police, it’s that we need more first responders, which is why I’m advocating for the creation of a new system of low acuity first response.”

A Lewis resolution also seeks to lay the groundwork for an 18-month process to change the police department, with a potential public vote in November 2021.

In a letter to the department on Monday, Chief Best wrote:

“To the Women and Men of the Seattle Police Department –

“I wanted to notify you that I will be retiring from the Seattle Police Department, effective September 2nd, 2020. I wanted you to hear this from me, but some media have reached this conclusion on their own.

“This was a difficult decision for me, but when it’s time, it’s time.

“I want to thank Mayor Durkan for her continuous support through good times and tough times.

“I am confident the department will make it through these difficult times. You truly are the best police department in the country, and please trust me when I say, the vast majority of people in Seattle support you and appreciate you.

“I am impressed daily at your skill, your compassion, and your dedication. I am thankful my command team has agreed to continue serving the department, and that Mayor Durkan has appointed Deputy Chief Adrian Diaz as the interim Chief of Police. Chief Diaz shares my commitment to this department and has the trust of the community.

“I look forward to seeing how this department moves forward through the process of re-envisioning public safety. I relish the work that will be done by all of you.

“After more than 28 years, I am so thankful for the time I spent at SPD. You are my family. You will always be in my heart. We have had tough times before and come out better on the other side. I am glad I pushed through each of those tough times with you.

“I am grateful for the opportunity to have served as your Chief.

“Remember to take care of one another.” 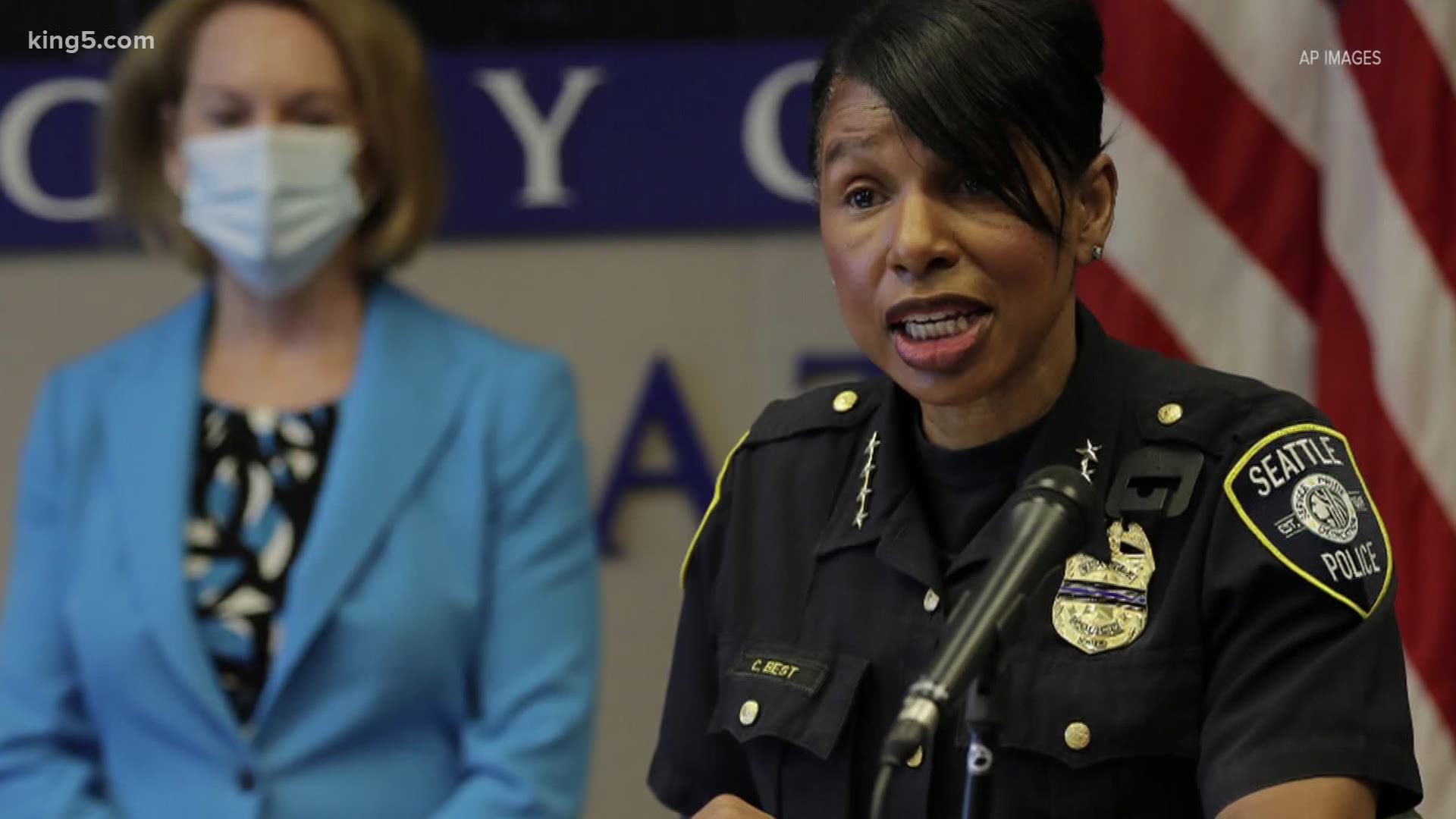 “Know that while I understand the Chief’s reasons, I accepted her decision with a very heavy heart. I have had the privilege to be with Chief Carmen Best in so many situations: with her family, at roll calls, in community meetings, and in nearly weekly meetings addressing public safety in Seattle. Her grit, grace and integrity have inspired me and made our city better. These last months, I knew Chief Best was the person to lead our city through this challenging time, to reimagine policing and community safety. Her leadership is unmatched nationwide, which is why it is a sad day for our City to lose her.

“Carmen Best is still devoted to this department and our city. I regret deeply that she concluded that the best way to serve the city and help the department was a change in leadership, in the hope that would change the dynamics to move forward with the City Council.”

The Seattle Metropolitan Chamber of Commerce criticized the city council following the news of Best’s retirement, saying the council chose “divisive rhetoric over responsible governance” that “cost our city a respected leader