Odessa police officials said the incident began late Saturday afternoon at 3:25 p.m., when a state trooper on Interstate 20 between Midland and Odessa tried to pull the suspect over. The driver opened fire on the state trooper and fled westbound on the highway, shooting at a person at I-20 and east Loop 338. From there, the suspect “proceeded on a shooting spree in the City of Odessa” and stole a postal truck, the Odessa police said in a statement.

The suspect then drove to the Cinergy movie theater on Highway 191, shooting an Odessa officer and a Midland officer. Officers returned fire, killing the suspect, the authorities said.

Mayor Jerry Morales of Midland said a rifle had been used in the attack.

Junior Bejarano, 20, a worker at the Twin Peaks restaurant in Odessa, had just finished cleaning a table when he heard a gunshot outside at about 4:30 p.m. “It was chaos in a matter of seconds,” he said. “People were screaming, flipping chairs, dropping plates.”

A few minutes later, he and other workers walked outside and saw several cars with bullet holes at a nearby intersection, in the turning lane of E. 42nd Street near Parkway Boulevard. He heard a woman screaming and ran to her car with his co-workers.

Inside, he said he saw a baby girl in a car seat whose face, shirt and lap were covered in blood. One of his co-workers, who is also a paramedic, checked on the child until on-duty paramedics arrived and said that she appeared to have been shot in the shoulder.

“She was conscious, but she was just covered in blood,” Mr. Bejarano said. “It was horrible to see something like that.”

Inside another car in the turning lane, Mr. Bejarano said an older woman was hyperventilating after a bullet had apparently passed through her car’s passenger window and then through her driver’s side window, just missing her.

“She was just shaking,” he said, adding that she was bleeding, but the injuries appeared to be from the glass breaking, not a bullet. “She really couldn’t talk,” he said.

The shooting rattled Mr. Bejarano and others, who said they never expected to see their town’s name on national news and trending on social media. 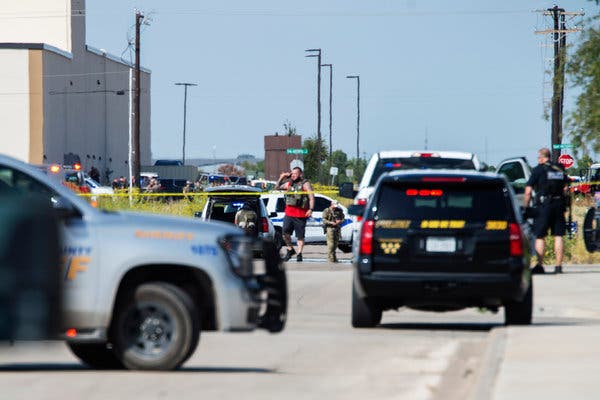 Another witness, Ernest Villanueva, 24, said he was driving westbound on Interstate 20 from Midland to Odessa when he approached a blue pickup truck and a silver sedan riddled with bullet holes. The vehicles were empty, Mr. Villanueva said, adding that he saw Midland police vehicles heading toward Odessa.

In the chaos, the police responded to a call of gunfire at the Music City Mall, where television news station CBS 7 has its studios. As reporters were live on the air reporting on the shootings that initially left five dead, they were ordered by the authorities to leave the studio.

They continued to report the news through their microphones, describing a scene of trash and footwear left behind by shoppers running from the mall.

Russell Tippin, the chief executive of the Medical Center Health System in Odessa, said 13 people had been treated at the hospital, including one who had died and a patient younger than 2 who had been transferred to another hospital. It was unclear if the person who had died was included in the total given by the Odessa police.

Seven of the patients at the hospital were in critical condition from gunshot wounds as of Saturday night, and most of those had already undergone surgery. Two patients were in serious condition. Eric Finley, a hospital spokesman, said the toddler was in satisfactory condition in Lubbock.

The attack came just four weeks after one of the deadliest mass shootings in Texas history, when a 21-year-old gunman opened fire at an El Paso Walmart on Aug. 3. Odessa is nearly 300 miles east of El Paso.

The El Paso shooting remains raw in Texas, and the attacks on Saturday reopened some of the anxiety and fears for many, including lawmakers and law enforcement officials. A handful of those wounded in the Walmart shooting remain hospitalized, and the newly formed Texas Safety Commission held its second meeting on Thursday to discuss how to combat domestic terrorism and extremist groups in the state. Gov. Greg Abbott, who formed the commission following the El Paso shooting, was making plans to be in Odessa on Sunday morning.

“We’re not nearly past El Paso and then here it happens again,” said State Senator Kel Seliger, a Republican whose district includes Odessa and who is a former mayor of Amarillo, a city four hours north of where the attack unfolded. He said the attack forces people into the position of “not thinking to ourselves, ‘Is this going to happen again?’ but when it’s going to happen again.” 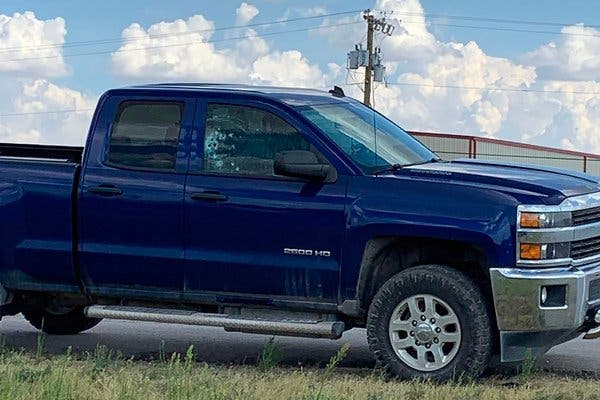 In parking lots and on streets throughout Odessa on Saturday night, cars and trucks that appeared to have been shot at by the gunman were cordoned off with police tape. Near a car dealership where several police and state-trooper vehicles converged, Pete Zubia watched the scene unfold.

“I think you can definitely feel the stress and the confusion,” Mr. Zubia said. He had moved from El Paso to Odessa several months ago, and his family in El Paso has been keeping in contact with him throughout the day. He said they were taking it “very hard.”

Faith Sanchez, 20, a sophomore at Odessa College, said in a phone interview that the El Paso shooting had been weighing heavily on her mind. On Saturday, she was eating at a Texas Roadhouse with her family when word of the shooting spread.

“While we were eating, everyone was just kind of panicking and wondering if we should go outside,” Ms. Sanchez said. “They informed us that there was a lockdown.”

The cities of Midland and Odessa make up part of the cultural heart of West Texas, oil-and-energy towns in the Permian Basin that often either thrive or languish depending on the price of oil. It is a solidly red region of Texas that wears its presidential connections with pride — Midland is the hometown of both former President George W. Bush and his wife, Laura Bush.

“We never thought this would happen here,” Ms. Sanchez said. “So many people are just in shock. We’re scared.”

I hope people will look positively to people who do their work perfectly and keeping (one of the key players) the United states safe.

this (for them duty and not service )

this is just one example there is so many others