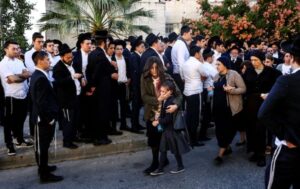 TEL AVIV — A student was killed and at least 18 others injured after explosions went off at two bus stops in Jerusalem at the height of the morning rush hour, in what Israeli security forces are treating as a “combined terror attack.”

The blasts come amid a surge in violence between Israelis and Palestinians this year, and there are fears that the incident could represent a return to the bombing campaigns of 20 years ago.

The first explosion occurred at about 7:05 a.m. local time, near a bus station located at the exit from the city. Half an hour later, another blast went off at a bus station near the Ramot Junction just over two miles away. Both bus stops were packed with students.

The first blast killed Aryeh Schupak, a 15-year-old Canadian Israeli yeshiva student who lived in the Har Nof neighborhood of Jerusalem. Among the wounded were two Americans, said Tom Nides, the U.S. ambassador to Israel.

He said in a tweet that he was “appalled by the cowardly terrorist attacks in Jerusalem today that targeted innocent civilians, including children.”

Israel’s emergency services, known as Magen David Adom, said that four of the injured were in serious condition.

Israeli police said that the bombs at both sites were activated remotely by cellphone. It said that the explosives were placed in bags and contained nails and pieces of metals to maximize the impact

More than 5,000 Israeli security officers were deployed throughout Jerusalem in the wake of the blasts, some searching other bus stops for any additional planted explosives.

The incident recalled the second intifada of the early 2000s, during which Hamas, the Palestinian radical Islamist group, orchestrated a wave of bombings across Israel.

“This is a complex combined attack in two arenas, which appears to be the result of an organized infrastructure, and not a spontaneous act as we have come to know in recent years,” Israeli Public Security Minister Omer Bar Lev said Wednesday morning after visiting the two explosion sites.

The bombings are a departure from the lower-tech, more lone-wolf-style attacks with which Israel has more recently been grappling. Since the spring, a string of Palestinian stabbings, shootings and car rammings have put Israel on high alert. In response, the Israeli military has conducted near-nightly raids, especially around the West Bank city of Jenin, from where a number of assailants have originated.

In nearby Jenin, Palestinian gunmen took the body of Tiran Ferro, a 17-year-old Israeli citizen from the Druze town of Daliyat al-Karmel, from a hospital, where he was taken after suffering serious injuries in a car crash.

His family said that about 20 masked gunmen arrived at the hospital and disconnected Ferro from a ventilator, and that he died shortly afterward. Israel is in talks with the Palestinian Authority to return the body, Daliyat al-Karmel Mayor Rafik Halabi told Kan, Israel’s public broadcaster.

Adi Ferro, Tiran’s uncle, told Kan that members of the Islamic Jihad, a militant group with a large presence in Jenin, had snatched the body. He said that his nephew was a high school student in the 12th grade and not a soldier, as the gunmen may have thought.

“If Tiran’s body is not returned, the kidnappers will pay a heavy price,” Israeli Prime Minister Yair Lapid said in a statement.

Palestinian militants have in the past abducted Israelis to negotiate the release of their prisoners.

Prime Minister-elect Benjamin Netanyahu, who is in the midst of coalition negotiations to form the most right-wing government in Israel’s history, tweeted on Wednesday morning that he was “praying for the peace of the injured in the combined terror attack in Jerusalem this morning and backing the security forces operating in the field.”

Netanyahu called for the swift formation of the new government to “return security to the citizens of Israel.”

Itamar Ben Gvir, a far-right politician who is set to be appointed as Israel’s public security minister, tweeted that the bombing “takes us back to the difficult intifada period.”

He vowed a return to the policies of targeted assassinations of Palestinian leaders, curfews on the hometowns of assailants, lockdowns in prisons with Palestinian inmates, and stopping Palestinian authorities from paying compensation to those who served time in Israeli prisons or were harmed in clashes. Israeli critics have dubbed it a “pay to slay” policy that they say gives incentive to violence.

“It’s time to take a hard hand against terrorists; it’s time to make order,” he said.