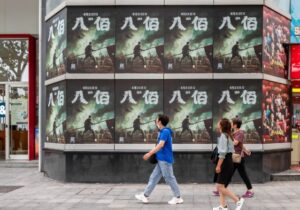 Major film studios in China are expected to narrow their third-quarter losses as box-office revenue surged after cinemas resumed operations in the post-pandemic era.

Wanda Film expects further recovery in profits as more of its films are scheduled for release soon, such as Detective Chinatown 3, which follows the highly successful Detective Chinatown 2, which raked in box-office revenue of nearly 3.4 billion yuan in 2018. The company said in a recent report that its business operations in all sectors are expected to recover to normal levels in the fourth quarter.

Beijing Jingxi Culture and Tourism Co Ltd, a producer of My People, My Country, the biggest box office winner during the just concluded combined National Day and Mid-Autumn Festival holiday, is expected to earn up to 100 million yuan in revenue from the 1.87 billion yuan box office collections as of Oct 8.

The company said in a recent statement it hopes My People, My Country and future film releases will boost profits in the fourth quarter. To date, Beijing Jingxi still has 15 films in preparation or scheduled for production and release.

Enlight Media, the production company of Jiang Ziya: Legend of Deification－which had the second-highest box-office receipts during the recent extended holiday－also earned an estimated 360 million yuan to 400 million yuan from the blockbuster’s 1.46 billion yuan box-office revenue as of Oct 11.

This year’s extended National Day holiday was truly a “Golden Week” for Chinese film companies. About two weeks before the holiday, the industry regulator raised the cap on maximum seating capacity from the previous 50 percent to 75 percent, starting from Sept 25, spurring more visits to cinemas.

The eight-day holiday saw more than 99 million visits to cinemas and over 3.92 billion yuan in box office revenue, becoming the second highest-grossing National Day holiday for the sector in Chinese history.

The Golden Week also marked a turning point for Chinese film companies as a majority, especially those profiting from box-office hits, are planning a full recovery in the fourth quarter and next year. The situation of continuous losses due to COVID-19 is expected to change in the fourth quarter, said Chen Shaofeng, a professor of culture and entertainment at Peking University.

Chen said further supportive policies from the government are also expected. Since the COVID-19 outbreak, many local governments have rolled out a series of supportive measures that have helped the film sector recovery.

According to a report in Securities Daily, China’s film industry is on the fast track to recovery and set to return to a level equal to that before the COVID-19 pandemic in the fourth quarter. The report said total box-office collections might reach 20 billion yuan this year.