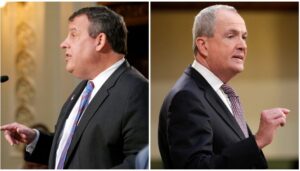 Christie’s exact condition remains unknown and it’s still unclear what course of treatment he’s receiving. The 58-year-old hasn’t tweeted since Saturday, and doctors, family, and friends have not made any public announcements about how he’s doing.

But a source familiar with the situation told NJ Advance Media on Wednesday that Christie was in good spirits, getting good care, and is not on a ventilator.

Multiple sources said there were no changes as of Thursday afternoon.

Murphy, a Democrat who succeeded Republican Christie in 2018, said he “exchanged notes” with Christie on Wednesday night but has “no further insight” into his condition.

“I shot him a note, as I had done a couple of days earlier, just to say that we’re here for him,” Murphy said during his latest coronavirus briefing in Trenton. “He was very gracious in his reply. And he remains in our prayers.”

“He is a fighter, let there be no doubt about it,” Murphy added. “He’s the quintessential Jersey fighter. We’re all with him in thoughts, prayers, and we’re here to do whatever we can for him.