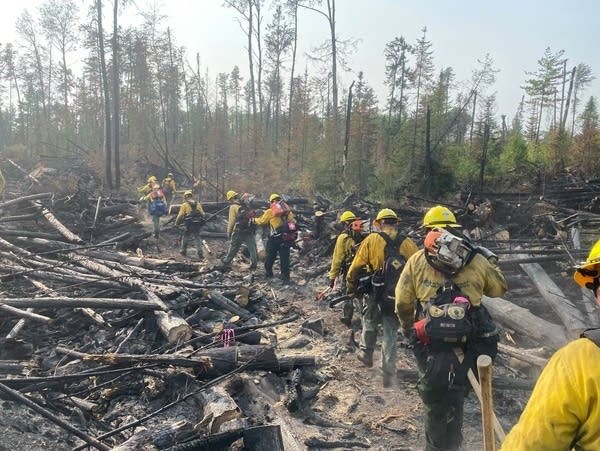 More than 150 firefighters continued to battle Thursday through a jumble of downed trees waist-to-chest high to contain a wildfire burning about 20 miles east of Ely.

Meanwhile, the Superior National Forest announced a new slate of temporary Boundary Waters Canoe Area Wilderness closures on Thursday afternoon amid concerns about larger wildfires burning just across the Canadian border in Quetico Provincial Park, and their potential to expand south into the BWCA.

The new closures include travel, campsites and portages along and near Iron and Crooked lakes along the Canadian border north of Ely, as well as some smaller lakes north of Gun Lake. The new closures, which take effect Saturday and will remain in place for at least a week, also include two BWCA entry points — Mudro No. 22 and No. 23.

Officials have “enacted this closure order given the time required to locate and move BWCAW visitors out of the area if the wildfire(s) spreads into the U.S. and creates hazardous conditions. Quetico Provincial Park has already enacted a closure area for the fires. Travel times to these areas in the BWCA are measured in days, not hours, and this would not allow for rapid evacuation of the area.”

“Wilderness rangers will initiate contact with visitors on and near Crooked Lake beginning on Friday … and instruct them to move out of the adjacent area to safer zones,” the Forest Service reported, noting it’s in daily contact with Canadian officials about the Quetico fires.

Because of drought conditions and increased fire danger, a temporary ban on most campfires in the Superior National Forest remains in place. The ban includes all campfires in the BWCA. Elsewhere in the forest, campfires are allowed only in Forest Service-installed fire structures in developed, fee campgrounds.

To the southeast, authorities said the Delta Lake fire east of Ely remained at about 65 acres and about 5 percent contained as of Thursday morning. It was sparked by lightning last week and is burning just outside the BWCA.

Thanks to “grueling saw work,” crews have cut trails through the storm-downed trees and into the fire zone, and expected to complete a containment line around the fire on Thursday. That includes water pumps and hose line to conduct mop-up work.

“Mop-up entails finding and extinguishing remaining heat so the fire does not spread outside of the containment area. It’s done by breaking apart smoldering debris and fully extinguishing embers,” the Forest Service reported Thursday. “As with the access to the fire, the blowdown will make mop-up more challenging for the firefighters.”

Crews continue to get help suppressing the fire from water dropped from aircraft. They’ve also installed pumps, hoses and sprinklers around some structures closest to the fire as a precaution.

In addition to the closures announced Thursday along the Canadian border, the Forest Service has closed a number of BWCA lakes, campsites and portages because of the Delta Lake fire: