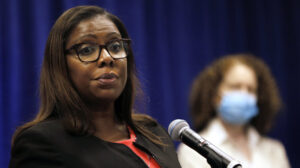 Letitia James, New York’s attorney general, pauses while speaking during a news conference in New York, U.S., Thursday, Aug. 6, 2020. New York is seeking to dissolve the National Rifle Association as the state attorney general accused the gun rights group and its current and former senior officials of engaging in a massive fraud against donors. Photographer: Peter Foley/Bloomberg via Getty Images

The attorney general of New York took action Thursday to dissolve the National Rifle Association following an 18-month investigation that found evidence the powerful gun rights group is “fraught with fraud and abuse.”

Attorney General Letitia James claims in a lawsuit filed Thursday that she found financial misconduct in the millions of dollars and that it contributed to a loss of more than $64 million over a three-year period.

Seeking to dissolve the NRA is the most aggressive sanction James could have sought against the not-for-profit organization, which James has jurisdiction over because it is registered in New York. James has a wide range of authorities relating to nonprofits in the state, including the authority to force organizations to cease operations or dissolve. The NRA is all but certain to contest it.

The NRA said in a statement that the legal action was political, calling it a “baseless premeditated attack on our organization and the Second Amendment freedoms it fights to defend… we not only will not shrink from this fight – we will confront it and prevail.”

“The NRA’s influence has been so powerful that the organization went unchecked for decades while top executives funneled millions into their own pockets,” James said in a statement. “The NRA is fraught with fraud and abuse, which is why, today, we seek to dissolve the NRA, because no organization is above the law.”