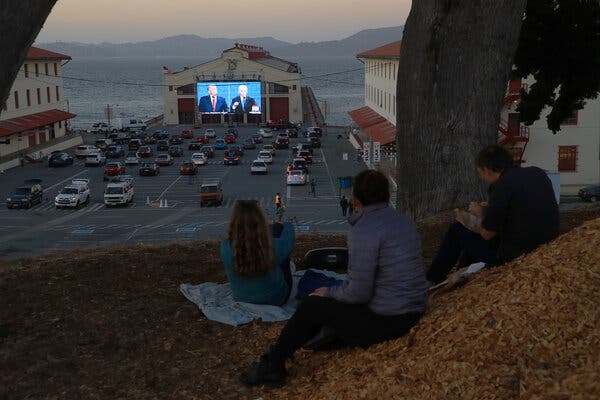 Before the president’s last, best chance to change the trajectory of his re-election bid, his mandate on Thursday evening was at once clear and complicated: Be less like Donald J. Trump.

It can be said that he tried, by his standard. He succeeded at various points in acting like the type of person he claims to doesn’t like : a typical politician in a debate. He spoke with an inside voice while saluting his own pandemic response. He interrupted far less. He thanked the moderator for letting him chime in and did not sound sarcastic while doing so.

And it is far from certain that he helped himself enough anyway.

Swiveling all night between heeding the advice of allies who have pleaded for uncharacteristic discipline and succumbing to impulses that can still consume him as he faces down an opponent he cannot process losing to, Mr. Trump stood before the electorate a candidate in conflict at his late campaign hour.

If Mr. Trump appeared to recognize that the debate represented his final mass audience less than two weeks before Election Day, he also showed the limits of even a more finely calibrated executive performance.

In an election that Mr. Biden’s team has sought to frame as a referendum on the incumbent, particularly his handling of the coronavirus — an endeavor that Mr. Trump has often made quite straightforward for his rival — it was the president who entered Thursday night with more work to do, given the national and battleground state surveys showing him behind.

At times, his answers seemed tailored explicitly with this deficit in mind, targeted at groups with whom he must improve his standing, like older Americans, whom he pledged at one point to “protect” four times in a matter of seconds.

But in a moment of relentless national upheaval, manifesting in protest, public health crisis and immense financial turmoil, Mr. Trump also could not help but accentuate the most essential qualities of his tenure on Thursday, reverting to fits of magical-thinking-aloud and grievance-stuffed nonrestraint.

If voters reject him next month, this will be the chief reason: The 2020 campaign is different, and Mr. Trump is not

its a respected point of view