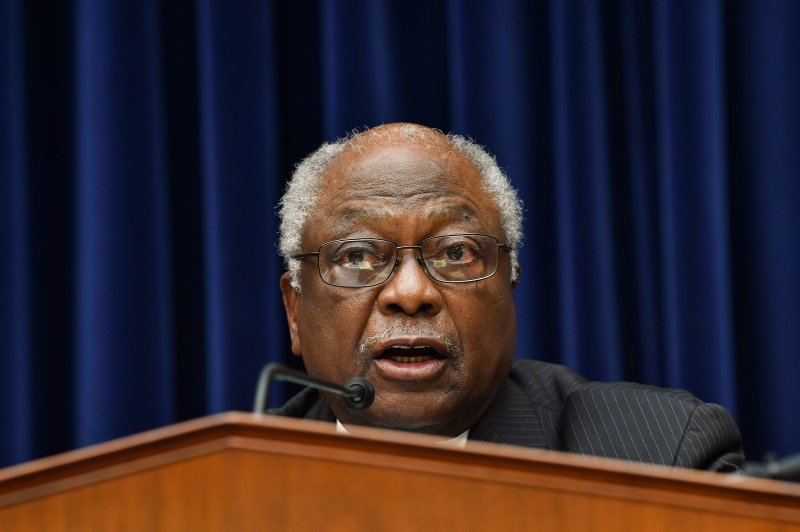 Name a major political story this year and House Majority Whip Jim Clyburn has probably been at the center of it. Many Democrats believe the South Carolina Congressman’s endorsement of Joe Biden before his state’s February primary sealed the former vice president’s successful march to the presidential nomination. He has spent the last six months heading Congressional oversight of the Trump administration’s response to the coronavirus pandemic, chairing an investigation that put the brakes on a $765 million drug manufacturing contract with Kodak, and obtaining weeks of internal White House memos showing officials there had publicly downplayed the virus. This past spring, as the country was facing a reckoning after George Floyd was murdered by a Minneapolis police officer, Clyburn, who like Lewis is a veteran of the civil rights movement, took a leading role in the debate surrounding police reform, urging activists not to get bogged down in calls to defund the police, but to keep their goals focused on broader restructuring of law enforcement.

TIME spoke with Clyburn by phone from his office in South Carolina about upcoming challenges of COVID oversight, how Americans can counter what he deems unprecedented voter suppression efforts this election cycle, and his belief that Trump’s reelection poses an existential threat to U.S. democracy.

The conversation below has been edited and condensed for clarity.

What keeps you up at night in regards to your oversight of the Trump administration’s COVID response? What corruption are you most concerned about looking ahead?

I’m particularly concerned if I’m looking out into the future how we would go about doing what is necessary, not just to develop a vaccine, but how it would be distributed. [My committee] will not come up with the vaccine and we will not determine how it is distributed. We will only be able to look at the distribution to see whether or not the distribution is equitable. And I’m concerned about that. I was around for the polio vaccine. I remember the Salk vaccine. I remember the Sabin vaccine. The Salk vaccine was a shot in the arm; the Sabin vaccine was a little drop of syrup on a lump of sugar. You can imagine which was preferred. [Sabin] was the most preferred because it was a lump of sugar, but also because, according to the experts, it was most effective. Well, guess what community got the shots and which community got the lump of sugar. That is the kind of thing I think about a lot.

Conducting oversight of the Trump administration has historically been a heady task – even for Republicans. You’ve managed to amass some significant victories though. Why is the administration cooperating and listening to you when they’ve ignored your counterparts for years?

The Supreme Court recently ruled that South Carolina voters must have a witness signature on their mail-in-ballots. There’s been a lot of concerns raised that this decision will confuse voters. Do you agree with that? If you’re the Biden campaign, or any campaign in South Carolina, what do you do to make voters not confused?

Yes, I do, and I think that’s what that’s intended. I don’t know why anybody was surprised the U.S. Supreme Court did what it did in this instance. Look at what it did in Shelby v. Holder. It is part of the voter suppression, and unfortunately the Supreme Court is moving toward being a very partisan political court. We’re doing everything we possibly can [to help voters]. My philosophy about life is not to spend a whole lot of time worrying about things I have no control over. I’ll tell you what I have control over, and I have control over organizing to get the vote out.

That legal fight is just one of many battles playing out in America’s courtrooms on voting rights this year. Overall, are you more worried about voter suppression this election cycle than you have been in previous cycles?

One of your former aides, Jaime Harrison, is running a surprisingly tight Senate race in South Carolina. Why has Harrison managed to keep the race so competitive, and what do you think he needs to do to get over the finish line?

Jaime came into my life when he was an 11th grader. He has demonstrated to voters in South Carolina that he will be fair, he will be conscientious, [and] he will work with people and respect them no matter what side of the aisle they are on. And people trust him. What bothers people more than anything else are hypocrites. And Jaime has gotten a gift in this campaign because Lindsey Graham has been so hypocritical – I’ve never seen anything like it. People always had reason to vote against Lindsey Graham, but Jaime has given them somebody to vote for as an alternative.

Do you think he can get over the finish line?

Yes I do. I didn’t think it seven days ago, but I do today.

You endorsed Biden early on, giving his campaign a much needed boost. Polling now shows him leading Trump, sometimes by double digits. Are you worried about a repeat of 2016?

Republicans didn’t just attempt to affect the outcome of the election [in 2016], they succeeded in affecting the outcome of the election. But there’s an atmosphere that’s created that allows [them] to do this. The atmosphere was created by the Clinton campaign. Not going to Michigan? Not going to Wisconsin? I was in Wisconsin the day before the election. And I saw us losing. I called campaign headquarters at 2:00 that afternoon before the election and I told them we were not winning in Wisconsin. They thought I was crazy. I suspect that Joe Biden’s campaign is doing what it needs to win. The only way Joe Biden will lose Michigan, Wisconsin and Pennsylvania, in my opinion, is for the Republicans to succeed in affecting the outcome. Not just voter suppression, but I think they’re getting a lot of help from the Russians and everybody else. The FBI and other people are saying that the Russians are still trying to affect the outcome of the 2020 election. These people [have] got all the tools. And they’re saying they did it in 2016 and they’re trying to do it in 2020. So if they try to do it now will they be successful? We’ll see.

Do you think the Biden campaign is doing an adequate job of canvassing and stressing the need to vote in person?

They’re doing an adequate job here in South Carolina right now. I don’t know what they’re doing in Florida or in Pennsylvania or Michigan. They may be, I don’t know. If it was ordinary circumstances I would be flying around the country going to these places like I usually do.

How is the Biden campaign feeling about their chances right now?

Well, I think they feel pretty good. I had a 9:00 phone call this morning with some of the campaign people. They’re cautiously optimistic. They feel good, but they’re not overjoyed yet. I don’t think they’re going to make that mistake.

After George Floyd’s murder in May, both House Democrats and Senate Republicans unveiled police reform packages, but were unable to reach an agreement. Do you see this issue taking priority in the next Congress, regardless of the election outcome?

Absolutely. Police reform is going to be a big, big issue. It’s not just policing but reforming law enforcement, reforming the judiciary. [I’ve suggested to the Biden campaign] that we establish a committee or commission to take a look at the 1986 and 1994 crime bills to see the extent to which there were unintended consequences that can be corrected. We’re leading the world in incarcerations and have people being put away for life for non violent crimes. This kind of stuff has got to stop.

Anything else we didn’t touch on you want to discuss?

We didn’t touch on the overarching theme that is not as sexy as other things. But I really believe strongly the campaign [this year] is really about whether or not the greatness of this democratic experience that has been going on in this country for more than a couple centuries will continue its pursuit of perfection, or whether or not the clock gets turned back, as it has done before. This election is much more than whether or not there will be law enforcement reform, or whether there will be a cure for COVID-19, or whether we will have the economic development we need to create jobs. None of that will matter if Trump is reelected. If Trump is reelected, it will seal the fortunes of this democracy. It will be no more