The roots of the Protection & Indemnity Club or a P&I club were founded in 18th century England. Those were the days of sailing ships and extremely slow and inefficient communication system. Ship owners and the underwriters had limited contact and the hull insurance did not cover all aspects of loss on board. A group of ship owners formed an association to provide each other insurance cover. This association was a non-profit making body controlled by a group of close-knit ship owners. These associations were named as Mutual Hull Insurance Clubs. The basic principle of the club was that each member of the group of ship owners would share with other members the cost of any hull claim, which an individual member suffered. It was paid rate ably according to the value of the vessel or vessels owned by that member of the club. This spread the risk over a number of owners and provided the cover, which was otherwise lacking in the insurance market. Pooling of risks made the cover cheaper than what was available in the market. In addition, the club was able to have greater control over the handling of claims when compared to the insurance cover provided by underwriters. The increase in the volume and the complexities of world trade expanded the risks covered. In due course, the mutual insurance organisations joined forces to form the present date Protection and Indemnity Club. Most of the Protection & Indemnity Clubs were established by the beginning of 20th century. They were administered by a group of members, the committee, which met periodically to decide on the payment of claims and the levying of calls (premium).

Covers provided by the P and I club

Following are the typical covers provided by a P and I club:

Claims other than above can also be considered under the so-called ‘Omnibus Rule’, in which the club committee has the discretion to consider deserving claims from any member at any time.

What is “call money” and how is decided by the P and I Club?

The premium rates to be paid to the club by a ship owner are called the “call money”. The amount is decided by the committee based on the fleet’s ship types, ages, gross tonnage, trades, flags, crew nationality, exposure to risks, and other factors including the member’s claims record and the likelihood of large claims in the coming year.
The member is advised of the total estimated call for the next 12 months; this comprises of an advance call and a supplementary call. Advance calls are levied on all members at the start of the P & I year, which is February 20th (on this date sailing vessels would depart for the Baltic from ports on the north-east coast of England following their winter lay-up and by tradition and still is the date from which insurance was required).
Later in the year, if claims have been heavier than expected, the managers will ask the members for a supplementary call to “balance the books”. Clubs aim to be accurate in their predictions of future claims so as not to burden owners with supplementary calls. Refunds are made when income (calls + investments) exceeds outgoing (claims + expenses).

Related Article:   What is a Marine Policy? Basics you need to know!

Who are P&I club correspondents and what are their functions?

Are for legal reasons, representatives and not agents of the club;

Will attend member vessels when so requested by the master or agent in order to protect a member’s interests;

Are generally well acquainted with the club’s rules and policy, etc.;

Will report any occurrence likely to result in claim on the club;

Maybe instructed by the club “to offer letter of undertaking in case of possible liability. In most cases of bunkering oil pollution or damage to jetty etc., a bond is to be posted to avoid arrest.

Most clubs provide the ships with a list of correspondents.

How are claims of P& I clubs paid?

~Club LIMITS have been updated. Below for understanding purposes only~

When a member of a P & I club has a claim, the first $5 million will be met by the club’s own fund. In excess of $5 million and up to $30 million the claim is divided among the member clubs in the International Group Pool (including the club making the claim), with the pooling contribution of each club being calculated taking into account its entered tonnage, premium income and claims record in the Pool. For claims in excess of the Pool limit, the International Group arranges an Excess of Loss reinsurance contract in the market; this currently provides cover for $2000 million ($2 billion) in excess of $30 million in relation to all types of claim except oil pollution, where the limit is $1000 million ($1 billion).

Related Article:   What is General Average & the importance of York-Antwerp Rules ?

Should the claim ever exceed the upper limit of the Excess of Loss Contract, it should fall back on the Pool and be borne by each club pro rata according to its entered tonnage.
Such a claim is called an “overspill claim” and would be funded either from the club reserves or by making a special “overspill call” on the membership. For most of the history of die P & I clubs, there is no upper limit to cover, but there is an upper limit of $4.25 billion on overspill claims. Some clubs extensive reinsurance for overspill claims. 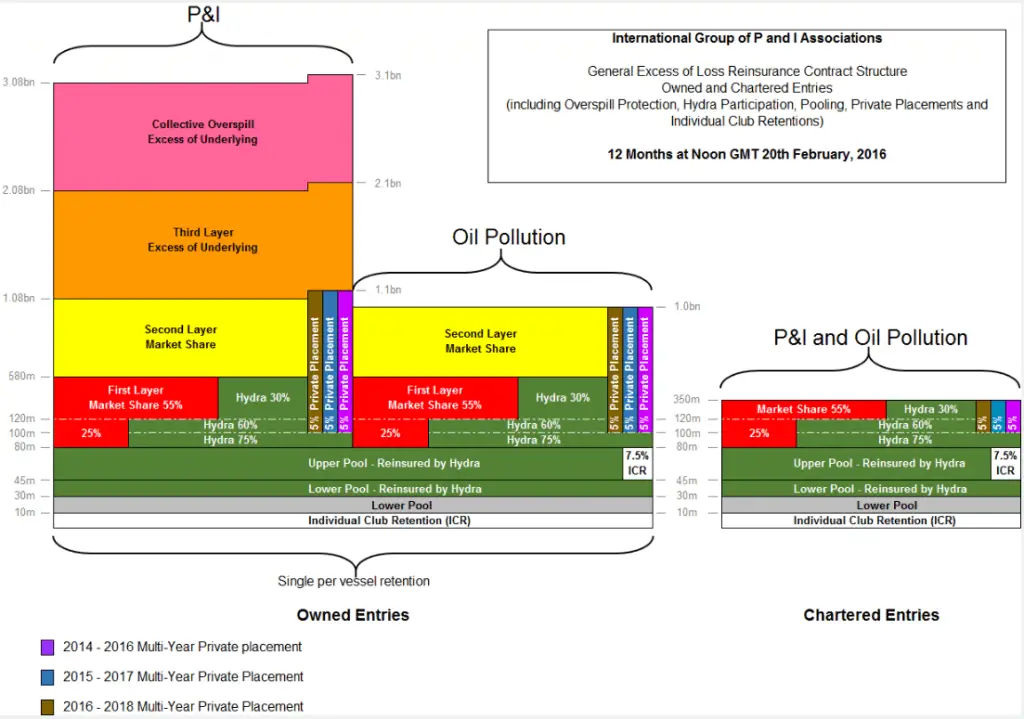 How does a ship owner register his claim?

A ship owner, who is a member of the club, must give immediate notification of any incident, which could result in a claim or liability within the scope of the club’s cover. Once a claim or a potential claim has been notified the club takes over the investigation and handling of the claim. It takes the help of the correspondents, surveyors and lawyers appointed by the club.

Which liabilities are normally not covered by the P & I clubs?

Clubs will not normally cover:

Delivery of cargo to a port other than the port specified in the bill of lading;

Failure to arrive or late arrival at a port of loading;

Delivery of cargo without production of bill of lading;

Ante-dated or post-dated bill of lading;

Clean bills of lading in case of damaged cargo;

Deck cargo carried on terms of an under-deck bill of lading;

Arrest or detention of an entered ship.

What are the P&I covers for pollution?